“I WANT MY THE AMAZING RACE”

Anyone else remember the (now thirty-five year old) “I Want My MTV” ads?

The finale of The Amazing Race aired on Friday night but I have still not seen it arrive in iTunes. This sucks because I am steadfastly trying not to find out who won before I can watch it. I do have a copy of the episode on my iPad at home that I downloaded from my Hopper at work (using that great transfer functionality that I wrote!) but that’s filled with commercials and I’d rather watch without them. Pooh! This is like getting a lump of coal in my stocking.

Bah Humbug
Saturday night’s performance of “A Christmas Carol” was a thrilling as ever. Rumor had it that the man playing Scrooge would not be performing this year, but that was not the case. Perhaps they were confusing him with the man who retired from the same role at the Alliance Theatre after last year’s run?

I alway wonder what that area would become if it were cleaned up. Hell, I’ve been in Atlanta long enough to remember eating at the Mick’s down that way, the one that was near the Pleasant Pheasant (if memory serves me right).

Juck The Fets
More coal came in the form of that lousy Patriots v. Jets game yesterday. I watched the game at Taco Mac Perimeter (after working for three hours) with my boss, our friend Amy who is a Pats fan, and some dude (that she likes) named Brian, whose Boston accent was so thick you’d think he’d just walked out of Central Casting.

If ITP-Reader Jenka, or my long-lost friends Dave and Mel read this: 😛 to you!

After my twelfth disappointment of this year I wandered over to Target to buy some necessities (I considered sleeping at the office, but it wasn’t in the cards). When I returned to the Jackmobile, which I have been driving again increasingly even with its Check Engine light on, one of the frontrunners for its replacement was parked next to me. 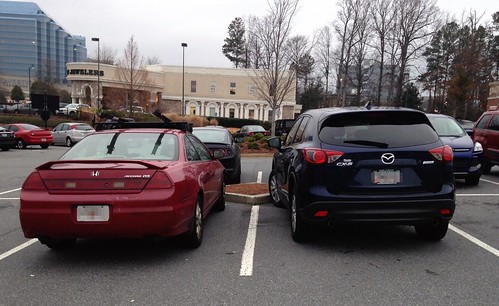 As an aside: if you ever feel ignored and want email, just request a car price quote using TrueCar. Within minutes after requesting one I received fifteen emails from dealers.

I will be making time this week to test-drive vehicles, I’m thinking my purchase will occur either Friday or Saturday.

Will I Be In Tune Tonight?
I’m considering “running” the Tacky Lights Tour Moonlight Hash this evening. You know, the one in which hashers wander the streets (not unusual), singing (not unusual), the clean versions of Christmas carols (unusual)? The hash will be hared by my old friends BWanA and Supersuck, so it should be fun. It’s been a long time since I did this hash, I only hope the weather holds out and that there is not much shiggy (since I didn’t pack any real hashing clothes). Shit, I just realized that I might have to by (ANOTHER) headlamp because I no longer have one in the Jackmobile (a hazard of cleaning out one’s car in preparation for selling it).

Time to make some code!

9 Responses to “I WANT MY THE AMAZING RACE”