The phrase “Home Alone” (which I apparently have used once before) best describes my weekend. However unlike on previous occasions I am not whining about this, rather I am celebrating it.

My Only Saturday/Sunday Excursion
Saturday morning I hopped into the M6 and took 285 around to Buford Highway; my destination was the Buford Highway Farmers Market. I wanted to go to the BHFM in hopes of getting quality food for cheap prices. While the former is certainly still true, the latter is debatable.

Being semi-strict about what ended up in my basket I bought the ingredients for two meals, and as a bonus I bought a tube of mortadella sausage (YUM! Where have you been all my life?) and some rolls on which to eat it. Lunch on Saturday and Sunday were simple mortadella sliced and put inside a roll that had some mustard slathered in it. Delicious!

Since I was on Buford Highway and was smart enough to pack a small cooler and an ice block to keep meat purchases cold, I stopped into REI on my way back to East Atlanta. I did it, I purchased the Yakima HoldUp 1.25″, though I’m still curious to see how easy it will be to install and uninstall on demand. ITP-Reader Barb, do you keep yours on the Crosstrek at all times? As an added bonus I got to say hello to an old hasher friend, Afterbirth, who was entering REI as I was leaving with my booty (the bike rack and not the pleasant REI employee who helped me purchase it and then wheeled it out to the M6).

Look Who’s Cooking (Again)
You may have rightly guessed that the reason I drove all the way up to the Buford Highway Farmers Market was to buy ingredients to cook. This was a weekend of eating in, eating well, and having enough leftover to last me the four days that I will be in Atlanta. While I’m certainly pleased to have some leftovers, I really need to start halving recipes because they are clearly not written with one person in mind.

On Saturday night I cooked a new-to-me Irish Stew recipe, which stated made four servings. This would be accurate if the four people eating were Irish rugby players! Here it is in the assembly stage: 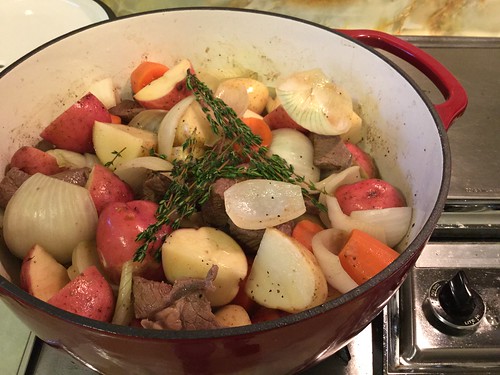 The meal (the first of many) was good, though I slightly overcooked it. Also, the recipe called for two pounds of lamb stew meat (which is expensive and was not sold boneless so I wound up paying for things I can’t eat!) but I went 75% beef stew meat and 25% lamb stew meat. In the future I may just go 100% beef stew meat to save some money, even if it means that I am not making a traditional Irish Stew.

On Sunday morning I started another new recipe in the crockpot, a cauliflower and potato stew. I decided to cook on Low so the base of the stew cooked all day while I putzed around the house doing some cleaning and organizing. By 5:30pm the soup components were ready for a blitzing with an immersion blender, followed by the addition of a cup of heavy cream. As I let the cream incorporate into the soup I fried up some cauliflower as a garnish. (Photos of the final product exist, but they are on my Nikon V1 and I’ve yet to transfer them onto a computer.) The soup was good, not great, but good enough to try again in the future. This recipe also made far too much soup, so I will have to see about cutting it down in the future as well.

I’ve come to realize that I don’t have that many years of cooking/experimenting left, so I best do it while I can and want to do so.

Look Who’s Doing Housework (Again)
If I were to have identified two tasks that needed to get done this weekend but clearly don’t fall into the category of “fun” they would have been:

Yesterday’s weather was so nice that I nearly did both chores. Early in the afternoon I climbed onto the roof and blew off all of the debris (I wonder how much returned last night after a rainstorm I didn’t even know would occur did so). I had the energy and desire to wash the M6 too, but not the supplies. The car washing kit in the basement is ancient and insufficient for a new vehicle so I need to make a Target run before giving the M6 its first bath.