One Meal To Rule Them All

I hadn’t planned to only eat two meals in total on Saturday and Sunday, but that’s the way things worked out.

After running some errands on Saturday morning I was hungry, but could not decide what I wanted to eat. All I knew was that I did not want the temptation of alcohol since I had consumed plenty the night before at Cypress Street Pint & Plate with some ill effects. Readers of this space might correctly guess what happened next… I found myself at a Chinese buffet. Hell, it was almost Chinese New Year, I had to eat Chinese! I was “good” and limited myself to too much food, as opposed to ridiculously too much food.

Yesterday I knew that I was meeting a bunch of friends for dim sum at Oriental Pearl. As to be expected the place was packed with people celebrating the new year and I stuffed my gullet with delicious food never to be found on any buffet that I can find in this city. While I was feeling stuffed at first, as you do after eating Chinese food, surprisedly I never was hungry again the rest of the day or night. 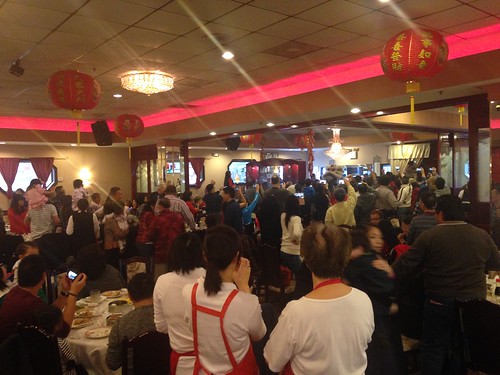 In the distance you can see the dragons entering the building to perform their ceremony.

Play It Again
Saturday night’s play was far more up my alley than was Thursday night’s.

On Saturday night I returned to Theatrical Outfit, this time for their performance of “Silent Sky”. The play, based on fact, is about a group of women who worked for a Harvard astronomy professor and were responsible for some of the theories used to classify stars and help calculate the distance of other galaxies. While it sounds nerdy, and honestly the underlying science is, the play was well performed and done so at a level that anyone with at least a high school graduation could understand. It’s been held over until March 8th, so if you want to get your inner nerd on and support Atlanta’s theatrical scene I highly suggest seeing “Silent Sky”. If you’d like to find out more information about the play I found this exhaustive Silent Sky Tumblr site. The evening would have been near-perfect if the young woman two seats from me didn’t repeatedly talk to her man during the play; even a low-volume sentence during a play irritates me. Besides, what could be so fucking important that it cannot wait until either intermission or the play’s end?

Works In Progress
While I struggle to correct some health problems, reducing alcohol consumption might be a great first step, I have added two new irons in my hypothetical project fire. A third iron, “Play 60” (the title of which I’ve stolen from the NFL) an attempt to get a hour’s worth of exercise every day, is near the fire but not yet in.

First, you know of my ongoing efforts to learn German. I’m still working on this, not as hard a I should perhaps, and have wondered if buying early-reader children’s books and translating them from English to German would be beneficial to me. The language in these books is generally uncomplicated, exactly like the German that I can currently understand, and performing translations may help cement vocabulary words in my conscience. It certainly couldn’t hurt, right? I stopped at a couple of Goodwills over the weekend and found their lack of organization frustrating, but their pricing of these books at $0.77 inviting. No book purchases have been made yet.

One purchase I did make over the weekend was a Polar H7 Heart Rate Monitor from REI. There are two reasons for making this purchase. First, the obvious one that I want to start exercising again so it may be beneficial to monitor my heart rate while doing so. Second, the H7 responds to Bluetooth Low Energy (BLE) and I am learning about this technology for a little iOS app that I’m contemplating. I was so into buying the H7 yesterday after eating dim sum that I skipped the Chinese New Year fireworks celebration, stopped at REI, and then went straight home, completely forgetting about all of the other errands that I had planned to run yesterday.

How went your weekend?

12 Responses to One Meal To Rule Them All