I Drove Into “Snow”

I can almost hear my brother saying “Snow? He calls that snow? If he really wants to see snow again he should move back to New York.” 😉

Here’s the “snow” into which I drove this morning. 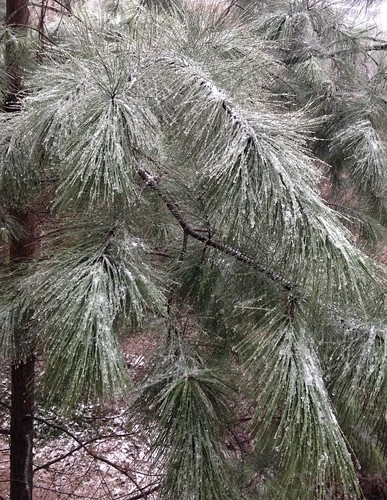 To be fair it was all wet until I got near the perimeter, at which time it turned into ice crystals and then snowflakes.

As I write this at 8:30am the snow is starting to accumulate. Hell, we may get as much as a quarter of an inch! I’m certain that it will all be a memory by 11:00am.

Lavanderia And Burrito
Because it was Monday night it meant that I was at the lavanderia. Due to late meetings at work I arrived there later than I desired. At first I was pleased to see the parking lot fairly empty, but was then disappointed to see that almost everyone who drove to the strip mall was also doing their wash. I managed to get all of the machines I needed, but it was a tight fit.

After doing my laundry I convinced myself that it was okay to eat dinner. I really wanted to go to Penang but I didn’t want to eat such a large meal and time was of the essence so I popped into Las Tortas Locas instead. For the first time since I’ve started eat at Las Tortas Locas the young woman working the cash register could not understand my food-based Spanish; perhaps I am starting to add a Germanic accent to it now? Through the use of an interpreter (interpreting my Spanish into hers), who was her coworker filling the juice machine, I was able to order a burrito al pastor, some chips and salsa, and get a cup for agua. Maybe I need to find a Waschsalon near der Biergarten so that I can eat dinner there instead.

AAPL Is At An All Time High!
And I am still kicking myself for selling as much as I have, for much less profit. Oh well, if I were rich I’d have no justification for not fixing up the ITP Estate.

Today’s A Momentous Day
Forget the blanketing of snow in Atlanta, today marks the [REDACTED]th birthday of my mother! I’m not saying that my mother is old, but when she was born there was no Google, Apple, nor Microsoft. However through the miracle of Wikipedia I have discovered that IBM was in business (founded in 1911!) by the time she was born; this was a fact that I did not realize.

Normally by 8:00am on my mother’s birthday I would have already called to wish her a happy birthday, but today I’ll let her sleep in… until 9:00am.

8 Responses to I Drove Into “Snow”