Last Friday Of The Month

I am at Callanwolde, an enclave on Briarcliff that I have passed hundreds of times in my twenty years of Atlant residence but have never entered until today. I am here for this month’s Creative Mornings Atlanta, and will finish this blog post later today.

I have much more to say today.

The Rest Of The Story
Last night I joined ITP-Reader Stacy and Aron for trivia at Midtown Tavern. This was my first trip to this bar so I wasn’t sure what to order, but the french fries covered with chili seemed like a good thing on a cold night. I was right. I also consumed two pints of beer, but not enough water, and am suffering the consequences today.

I used to feel as if I were a great trivia component but as the years have gone on my contributions have been lessened. Last night I didn’t add too much to the team’s effort, though I was the one who knew the four symbols present on the buttons of a Playstation controller, and I added one country to the list of seven countries that border Ukraine for the night’s final question. Spending a year working with Ksenija should have provided me with the knowledge of all seven, but I’m not so keen on geography.

Oh, did I mention that we won?
Yep, we sure did.

Here’s the ceiling of the room at Callanwolde in which today’s meeting was held. 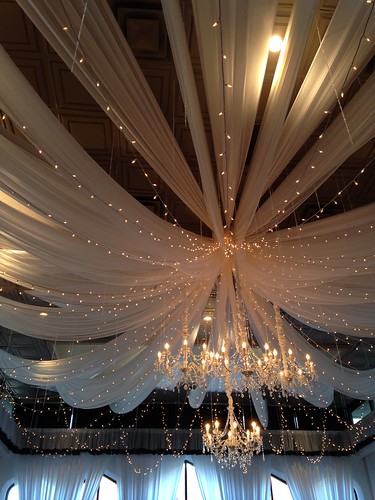 It was much prettier than my photo captures.

Nest month’s theme is “Ink” and it was relieved that it was going to be presented by a local tattoo artist. If you are aware of my dislike of the proliferation of tattoos you will understand while I will not be making an effort to attend next month’s presentation.

It’s Going To Be An Interesting, Yet Lackluster “The Amazing Race”
This morning, rather than blogging, I watched the first episode of this season’s The Amazing Race. As I mentioned on Wednesday this time five of the teams consist of people on an extended “blind date”, having met for the first time at the start of the first leg of the race. Perhaps it’s my own lack of luck in the love area I can’t understand why the producers of The Amazing Race though that this would be a good idea, or that people could actually find “love” in such an environment, though I am sure that there was much vetting of partners before pairing them on this “blind” date.

Have a great weekend, all.

6 Responses to Last Friday Of The Month