I was unprepared for the dramatic fall in temperature yesterday. I suppose that I was suckered into thinking that Spring had arrived by Wednesday’s unseasonably-warm weather, and if not, I just couldn’t imagine that it would get that cold again in one day.

Thankfully the only suffering I had to do was walking to and from the M6.

I Snoozed, I Losed
For months I’ve known about the Father John Misty show that will take place at Variety Playhouse in April. I enjoyed the show that they put on at Terminal West in 2013/2014 so I was certain that I’d go to this one.

I suppose that one hesitation I had in buying tickets for shows at Variety Playhouse is that I now have to do so via Ticketmaster, a greedy company that has gauged concert-goers for years. But I relented this week, only to find out that I have waited too long and the show has sold out.

Truth Of Consequences?
Imagine if you will, a self-confessed game show nerd not knowing that Bob Barker once hosted Truth or Consequences. Further imagine that this nerd actually watched these episodes when it aired in the early 1970s. Now imagine my disgust when I convinced us to not put “Truth or Consequences” but “Beat the Clock” instead during last night’s trivia competition.

We finished in second place, two points behind the winners. DANGEN! 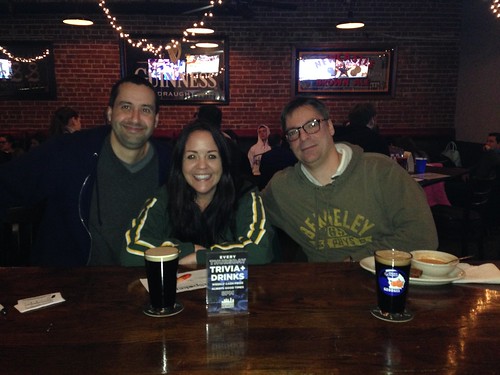 I’m dressed in a pullover because it was in my trunk and I was in desperate need for more layers. And if you are interested, yes, I was eating, I was in the process of finishing off a grilled cheese and tomato soup plate.

Overall the night was a great time spent with ITP-Reader Stacy and Aron. For me the funniest part of the night was when we answered “E.M. Forster” as the author of “A Room with a View” after debating how that couldn’t possibly be the answer since “E.M Forster” was the answer to a question last week. We convinced ourselves to go with our gut instincts after correctly summarizing that the MC moved the question to the end of the round because he had to ensure that he had the correct question and answer.

My shining moment last night was when I wrote “La Scala” for the answer to the opera category before the question was even asked. Thank you New York Times crossword puzzles for using La Scala frequent as an answer to your clues.

Free Beer? Sure!
Yesterday I lucked into a free ticket to tomorrow’s Secret Stash Bash given to me by a coworker who possessed an extra ticket.
SCORE!
I’ll be there for Phase 1 and I find it interesting that the event is split into two halves. So I guess that’s what I will be doing tomorrow.