In getting ready for Saturday’s event, described below, I finally found the leather glove I’ve been searching for since December; it was sitting on top of my camera bag (which shows you how little I’ve considered shooting recently). Of course Saturday’s high temperature was 61°F, and we’ve probably (and thankfully) departed the time of year in Georgia that dictates the wearing of gloves, so I had no use for it. I did set it next to its match, which thankfully I had yet to discard, for later in 2015.

I did also find something not nearly as joyous. While washing the M6 yesterday I discovered what appears to be its first ding. It’s not in one of the doors as I would have imagined, but rather it appears that something caused a nick in the pearlescent white paint on the hood. Stupid winter and the spreading of gravel! It’s really only a small nick that only I will notice, but if the paint is chipped down to the metal then I will have do something about this. At the time of the M6’s purchase I opted in for the extra insurance on the paint, so I think I will have to read up on the terms and conditions and at some point take them up on this matter.

Not So Secret Stash
I was the beneficiary of a free ticket to Saturday’s Secret Stash Bash held at The Prado. My ticket was for the first shift, 1:30pm-4:00pm, so I spent the morning kicking around the ITP Estate, then driving all the way out to Gwinnett to shop at Micro Center and then return some purchases to Fry’s, before returning ITP (too briefly) for a Indian buffet lunch as my “base” layer. 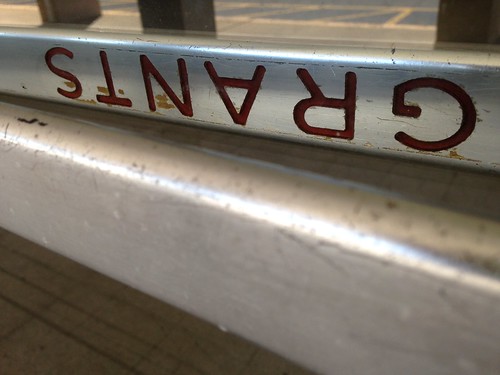 [Give yourself a point if you read the title in the voice of Mary Tyler Moore.

I have no history with Grants Variety Store other than stumbling across two of its former locations accidentally.

The first time happened in Dunedin, Florida. When I lived there the library was an old Grants location.

On Saturday I came across this location, located in a widely-abandoned shopping center inside the perimeter on Peachtree Industrial Boulevard.

In each case the door bar which is pictured above had been turned inside out to conceal the identity of the former resident.]

Knowing the potential for accidental over-indulgence I parked the M6 at work and Ubered to The Prado. Since I also knew that the weather was going to be stellar I figured that I could either Uber back to my car, or walk off whatever drunk I had acquired.

The beer bash was good, but far from secretive. The event was a coordinated effort between Taco Mac and 5 Seasons Brewing and had forty breweries represented (an unofficial count I got from the website) and perhaps too many attendees. I didn’t taste all off the offerings, but I had more than my fair share, making sure to rarely finish the pour given to me. I hate to waste good beer, but moderation is the key, friends. I can also add the Secret Stash Bash to my list of places to skip when looking for “Ms. Right”. Though there were two ideal candidates, each of which had significant others in tow, the bash was mostly attended by the beer-drinking equivalent of a computer programming event — read “dudes”. No, I am not surprised by this.

According to the MapMyRide app the route I walked to get back to the M6 was 3.8 miles and took me roughly one hour and ten minutes. It was all the exercise and sobering up I required, and hopped into the M6 upon my return I drove back toward East Atlanta. I thought my early arrival at home would spur me to do great things, but instead I made myself some dinner and then nodded off to sleep super-early.

I thought that I had slept an eternity until I recalled that the clocks jumped forward an hour at 2:00am Sunday morning. I still think this is a stupid thing for us to do.

IKEA OMFG
Prior to returning home I made the mistake of stopping by IKEA. I know. I know! Shopping at IKEA on a weekend is a rookie mistake but I just needed to look at one thing in person. The place was a zoo, a zoo inhabited by the slowest moving creatures known to man.

I found the one item, not in the color I had hoped to see, and then discovered that the one item I desire, a tv/entertainment system known as the “BESTÅ”, which happens to be the basis for most of IKEA’s tv/entertainment furniture, is being phased out. According to IKEA’s website “The product will soon be leaving our range, and may not come back in stock, so you may want to look for an alternative product.”

And since IKEA was also out of stock of the legs that go with the “BESTÅ” I think it wise for me to wait and see what comes next.

On Sunday I Turned Into A Slug
Behind schedule by the time I arose I was feeling okay, no ramifications from the beer drinking at least, but there was no spring in my sprung-forward step. By 11:00am I had convinced myself that I needed to wash the M6 (I wonder when this desire will wane), and in doing so discovered the aforementioned chink in its armor.

That was about all I did yesterday. Before I knew it dinner time had arrived and I finally motivated myself to get out of the house and, wait for it, go eat dinner. What a waste of a gorgeous day.

Dinner was good. I dined at Slice & Pint in the space formerly occupied by Everybody’s Pizza near Emory. I had two 10-ounce beers, a delicious plate of bacon knots (yum!) and two slices of the pizza pie I ordered. The leftovers of this pizza will be my lunch for the next two days.

Upon returning home I did a little German homework and watched a couple of things on my iPad before falling asleep.

3 Responses to Lost And Found