How Could I Forget?

Because of events happening later this week yesterday was not a Monday Night Lavanderia night.

After work yesterday I hustled down to the Warby Parker store in Buckhead. I had two things to accomplish:
1. Get one of the last pair of glasses I purchased adjusted so that they fit on my head better.
2. Determine if I wanted to plunk down $150 for a pair of prescription sunglasses.

I accomplished both tasks, including answering “Yes” to the second one.

Earlier in the day I had done some research regarding LA Fitness‘ hours and was pleased to see that they were open until 11:00pm on a Monday night. This would certainly give me enough time to go to Warby Parker and then make my triumphant return to the gym.

Except one thing happened… I forgot about my plan.

That’s right, after accomplishing my eyeglass-related chore I hopped into the M6 and drove straight home. It wasn’t until I was nearly finished with the dinner I had prepared for myself that I remembered that I had devised a scheme to work out. Hashtag FAIL. 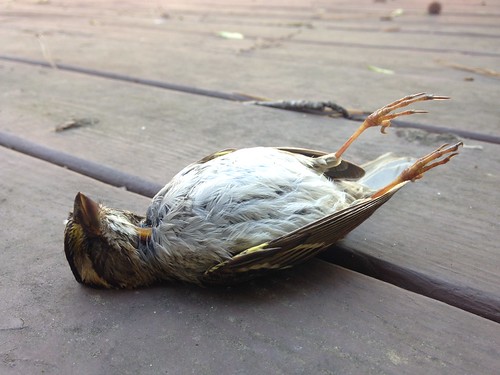 When I opened the blinds to the deck on the back of my house I discovered this lad (or lass) “sleeping”. I figured that it hadn’t yet figured out the time change so it was oversleeping. I gave it a few hours to wake up on its own, but it must have been really tired because it never did.

My Only Annoyance With Warby Parker
I really have two annoyances, but only one of them is specific to Warby Parker.

My first annoyance is that they are located in Buckhead, where it is nearly impossible to find a free parking space. I’m not penny wise and pound foolish, so I realize the benefit of spending $4 to park in order to save at least $150 for glasses, but still…

My second annoyance is that walking into Warby Parker is like walking into The Gap (something I haven’t done in many years). Does The Gap still exist? It may be more of a problem for guys than gals, but I remember the times I walked into The Gap wondering “Now which side it the guys’ side and which one is the girls’?”. This is my Warby Parker dilemma. When I brought it up with the saleswoman she smiled and assured me that all of their glasses are unisex, however if you go to their website you start out by select your gender, then you are shown glasses. Clearly Warby Parker knows that some of their glasses are better suited for one gender over the other. I’ve whined many times about fearing that I’d purchase effeminate glasses, though I had no worry yesterday because the pair of sunglasses I ordered are clearly macho, or at worst unisex.

Watch In, Watch Out
I watched Apple’s event yesterday regarding the launch of their watch, in addition to announcing a new laptop. It may surprise many of you that I have little interest in getting an Apple watch even though I wear a watch nearly every day. Who am I?

I Have Many Annoyances With Government
Well it’s happened again. Somebody in Government has done something that causes me to have to do work I shouldn’t have to do.

In the mail yesterday I received a notification, essentially a bill for $25, because my insurance company reported that I had let the liability insurance on the Jackmobile lapse toward the end of January. This is apparently some sort of violation, that must be dealt with in no more than a month’s time.

Here’s the obvious rub for all of you who read this space, I didn’t own the Jackmobile at that time! So now I have to go to my insurer and bitch at them, and then I have to send the State proof that I had sold the Jackmobile prior to “allowing its liability insurance to expire”. What a bunch of fucking nonsense.

Okay, have to run, well, work.

4 Responses to How Could I Forget?