My Time Of Year

I love this time of year. We’ve ridiculously altered our clocks so that it “stays lighter later” and when I wake up in the morning it’s chilly, but not cold (I know, cold weather returns once more this weekend, but we all know that it’s Winter’s last gasp in Spring).

Briefly I considered going to the gym this morning, but the lure of a quite office building for blog and code writing was too great. A glance at my calendar for today shows three hour-long meetings scheduled conveniently far apart to completely destroy any hope that I might have for writing code for an extended period today. Unless I wrap up this writing quickly. 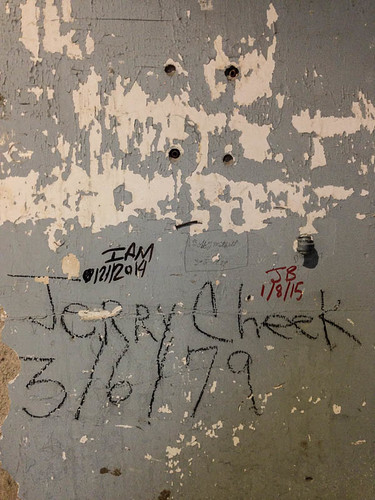 There is no way for me to know whether Jerry Cheek scribbled his name on this wall inside Ponce City Market on March 6th, 1979 or some time thereafter. Regardless, this struck me as kinda neat even though I am wholly opposed to graffiti.

Much Laundry, And The Time Goes By Quickly
Because I arrived in the office early yesterday I was able to sneak out at a reasonable time in order to do laundry. My clothes were washed, dried, and folded by 6:30pm and I treated myself to dinner at Pollo NorteÃ±o, which sits directly behind the lavanderia.

With another delicious dinner of chicken in my belly I hit the traffic going around 285 (it looked even worse to try and go down the Connector) and I was home by 8:00pm.

I used to think that getting home that early was a blessing, and that it meant that I could change my little corner of the world. But instead I did some much-needed German studying, watched Monday night’s The Tonight Show Starring Jimmy Fallon (which featured the strikingly-beautiful January Jones), then completed the task of putting linens back on the bed (I stripped the bed to wash them) and put my clean clothes away before nodding off to sleep.

Branching Out
I’ve felt a little constrained for the past six months. I don’t know if was the weather, the commitment of time for others, or a combination of each, but I just have not been satisfied.

A change is underfoot.

It started with going to the interview with Charles Brewer last Thursday night and was followed by going to the wireframe workshop on Monday night.

There are now two more events on my calendar. Next Monday night I’ll be attending the Apple WatchKit Hack Night at Big Nerd Ranch‘s headquarters. On the following Friday I will be headed to Technology Square in Midtown after work to attend the Harman Kardon SDK Battle Hack. I’m interested to see what’s going on during each of these events, as well as to see how my skills match up to those doing the hacking.

These changes will not mark a complete overhaul of my lifestyle as I still plan to do many of the things I’ve done in the past. For instance, I will be meeting up with ITP-Reader Stacy for trivia on Thursday night.

Storage Wars
I’m hoping that after a brief stop at IKEA tonight (must. go. on. weeknights.) that I can be productive again. My goal is to clean my den, including putting the small pile of “For Goodwill” stuff into the M6 so that I can make a drop off tomorrow. I’m hoping that if I can just keep making incremental progress that some day I will reach my goal.

6 Responses to My Time Of Year