If you read the title as “Jail Bait” shame on you!

Target Is Practicing The “New” Math
After stopping by the Apple store to purchase a $50 adapter (ugh, again, good thing I still hold shares of AAPL) I dropped by Target. My intent was to buy a new air filter for the HVAC at the ITP Estate — I change mine quarterly and was about a week late in doing so.

One filter in hand I was stunned when I saw an end cap containing more of the same and sporting this tag. 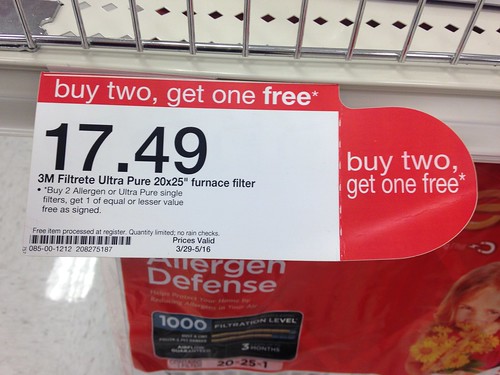 While waiting in line I did a quick summation of the cost of all of the items purchasing and knew that if my bill came to more than $50 something was amiss.

I think you can see where this is going…

I was surprised when the cashier gave me a $5 gift card, and then irked when my bill rung up to more than $60.

I walked over to the Customer Service desk and ask for help. After doing the quick math for the customer service rep and explaining that had I not been charged for a third filter I was being charged about $20 in sales tax (obviously not possible) she took me seriously. She told me that according to the computer the deal was “Buy Two, Get a $5 Gift Card” but when I showed her the photo of the shelf tag (I somehow knew “Buy Two, Get One Free” was too good of a deal) she relented and took off the cost of one of the filters.

What really shocked me was what happened next. Because I purchased two filters and satisfied the “Buy Two, Get a $5 Gift Card” condition the customer service rep insisted that I keep the $5 Gift Card. So in essence I got a free filter and $5.

One Of Fun Things About Spending Money At An Apple Store
When buying smaller, less expensive items (such as a $50 adapter) I usually can skip interacting with the overloaded sales reps and purchase the item using my iPhone. For some reason yesterday when I scanned the barcode on the box I was trying to purchase I received an error message. I tried scanning two different boxes just to be sure, each failed the same way.

With my failure I had to seek out a blue-shirted employee and ask for help. Fortunately one toward the front of the store was available and he was able to use his souped-up iPhone app to scan the item’s barcode.

Purchase made I walked out with my tiny box, no bag, and knowing that a receipt was being emailed to me. It almost made the fact that I had just spent $50 for an adapter easier to swallow.

No Exercise
FAIL! MY FAIL!

With the exception of my Target bonus I suffered many failures yesterday, including not exercising. I kept thinking that I was going to have a breakthrough at work and before I knew it 6:00pm had arrived and I was in no mood to exercise.

Because I still possessed a $25 Gift Card from Tilted Kilt I decided to have dinner there and blow my wad. If you read “blow my wad” and though about anything other than money then shame on you!

After drinking my first beer I ordered a corned beef sandwich listed on the menu’s insert. Within two minutes of placing my order my waitress, Safire (I don’t think that’s her birth name), came back and informed me that they were “out of corned beef”. I showed dismay be frowning. She then proceeded to tell me that the insert in my menu was for St. Patrick’s Day. A quick check of my calendar shows that St. Patrick’s Day was three weeks ago, couldn’t someone have removed all of the inserts from the menus in the past three weeks? I changed my order to their “Classic Nachos” to which I added chicken per the menu’s suggestion to which Safire told me that I wasn’t ordering “Classic” nachos, I was ordering “Chicken” nachos. With a rye smile I thanked her for her correction. I didn’t inform Safire that what I ate should have been labeled “Disappointing” nachos.

I was hoping to pay for my meal and beers with my Gift Card and give the remaining balance to Safire as a tip. Turns out that Tilted Kilt’s accounting system can’t handle such a transaction. So I tipped her in cash and now have a Gift Card with about $6 remaining on it.

If At First You Don’t Succeed
One of my scheduled tasks last night was to print out my income tax forms as well as the payment forms necessary to give to my accountant upon paying her today.

While I love technology I am often frustrated with printers and last night was no exception. On the eleventh of seventeen pages the printer stopped printing and flashed an error — some sort of “Drum Error” according to the small-typed legend placed near the lights. I was instructed to clean some wire, which I never found. After opening every possible door, jiggling the toner cartridge, removing a sheet of paper, turning the printer on and off a few times, and nearly giving myself an aneurysm when I tried to reinstall the printer using my laptop, magic happened and I was able to print again. I printed the final seven pages using my iPad and walked away, counting to one hundred in order to settle my nerves.

It had been a long, and very trying day…

Failure Is Not An Option Tonight
Even if we don’t win any money at trivia it will be a good night of hanging out with friends. Therefore failure is not an option.