Don’t Call It A Comeback

Again, another recycled title. After eleven years I’ve clearly run out of creativity.

We decided to change things up a bit:

We sat upstairs on the “patio”. It was a beautiful evening to be up there.

We ordered the Monster Pizza. 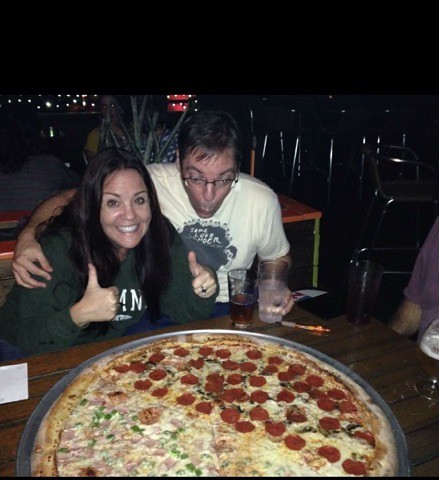 Yes, the five of us finished it, though some of my compadres did leave pizza bones behind. We almost didn’t order the Monster Pizza when we found out that it was $37, and $8 per topping. However, with $30 house cash we decided to live large.

And finally we decided not to be in first place at the end of the first half of play. In fact, we were in third… Further , we were in second place going into the final question. But, the assembled cast of nerds manage to answer nine out of ten parts on the final question correctly to complete the comeback. Oh wait, I said don’t call it a comeback…

Theater Going Tonight
Originally I had a ticket for tomorrow night’s performance of “F. Buch Minster Fuller” at Theatrical Outfit. But, since tomorrow is getaway day for me I decided to push my attendance to tonight. Hopefully traffic won’t be so shitty that I cannot attend.

Damn Rain
Looks like rain is moving into our area tonight/tomorrow, there goes my plan to get a long bike ride in prior to heading south. Dangen!

Anyway, there probably will be blog entries on Monday and Tuesday whilst I am in Florida. If not, I apologize in advance.

7 Responses to Don’t Call It A Comeback