I’m suffering this morning, but not in the way I had hoped to be. Instead of waking up and getting on the trainer I’ve awoken with an upset stomach which has prohibited this exercise. Dangen! Something I drank or ate last night? Who knows…

As always Horizon Theatre put on an entertaining performance of “Santaland Diaries”; I’ve lost count of the number of years I’ve gone too see it.

Because traffic wasn’t as bad as I feared I got down to Little 5 Points with enough time to park, and then walk up to Wrecking Bar for dinner. I ate their pastrami sandwich with fries, and tacked on a side of Brussel sprouts hash. With my meal I drank two, eight-ounce IPAs.

I even had enough time to take a photo last night!
“Have a Coke and a Smile” – Atlanta, GA 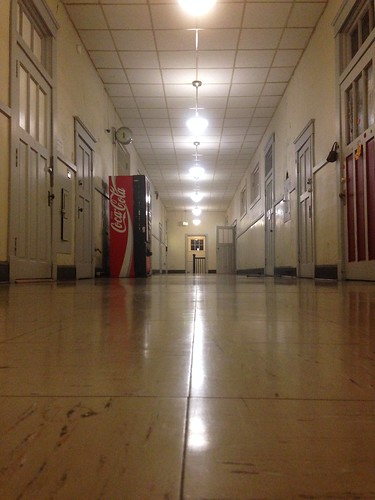 This was taken inside the old school building that houses Horizon Theatre.

Santa Came Early To ITP-Writer Paulie
Yesterday I took possession of a Anova Sous Vide Immersion Circulator that I had ordered last week. It’s part of my “2016: Changes Are A-Comin'” Campaign.

Weekend Plans
Tomorrow night will be Part 2 of my Annual Christmas Routine — “A Christmas Carol” at Shakespeare Tavern.

I’m contemplating doing the Urban Assault Wheelhopper on Sunday because it starts four blocks from the ITP Estate. We’ll see…

6 Responses to Another Quickie