Well, That Was A Weekend I Suppose

Although I “did things” I wasn’t incredibly satisfied with this past weekend.

On Friday night I stayed at work late trying to get some things done. After leaving the office I drove toward home, stopped at QT for gas and two lottery tickets, and then made the rest of my journey. The rest of my night was so unspectacular because I can’t recall what I did.

I awoke Saturday morning and tried to be productive. I packed up the M6 with my last remaining 27″ CRT television, I believe the one I bought when I first moved to Atlanta twenty-one years ago, as well as a box of dead electronics. With the car loaded up I drove to the recycling day and paid $10 to get rid of the tv and stuff. From the recycling center I drove up to IKEA to buy a small lamp for my den, which I discovered on Friday night was very dark at night. After extracting myself out of IKEA I drove to the Lowe’s in Edgewood Retail District to pick up the area rug I ordered earlier in the week. On Saturday night I drove into downtown to attend “Tom Key & Friends” at Theatrical Outfit. I was home early enough to watch that bizarre ending to the Steelers v Bengals game.

The plan was to meet some of my Flickr friends in Centennial Park at 8am; newsflash — it was cold. Four of us wandered around downtown awaiting the start of Imaging USA. 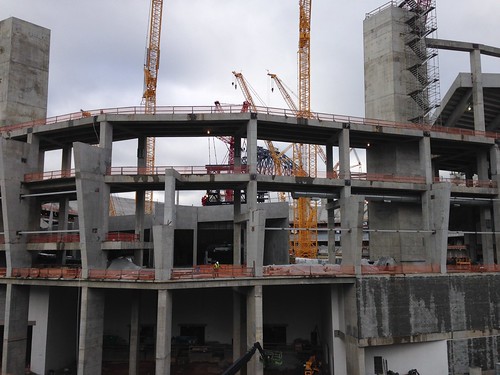 Imaging USA was good, I looked at the equipment and the women in attendance. After attending the show we walked over to Park Bar for lunch before splitting up. I returned home after lunch, dickered with my media center setup — which I may actually finish eventually — and then became a lazy bum by watching football.

9 Responses to Well, That Was A Weekend I Suppose