Once again I overslept and my required presence on an 8am conference call kept me off the trainer this morning. I need to start riding again as I need to prepare for BRAG Spring Tune Up in about three weeks!

Having Issues With Apple And AT&T
Yesterday Apple cleverly figured out a way to force me to update to El Capitan, their latest operating system that was released last year. I updated my iOS devices (iPhones, iPads) to iOS 9.3. In order to communicate with these devices using Xcode, Apple’s software development environment, I had to update to Xcode to version 7.3. It turns out that Xcode 7.3 is incompatible with Yosemite, Apple’s operating system preceding El Capitan, so in essence I was forced to update to El Capitan. So far, so good.

When surfing the internet, specifically sites like YouTube, at home I experience annoyingly slow data transfer. It’s gotten so bad that I rarely attempt to watch a YouTube video at home because I’ll experience the same sort of “buffering” delays I used to see on dialup modems in the 1990s. I won’t be surprised that if some day I read an article about a class action lawsuit against AT&T because someone figured out that they are discriminating against certain network traffic. If Google Fiber would make its way inside the perimeter I’d gladly switch, but until then I should probably contact AT&T and bitch to them directly.

ITP Flickr Pic
How about something less macabre today? 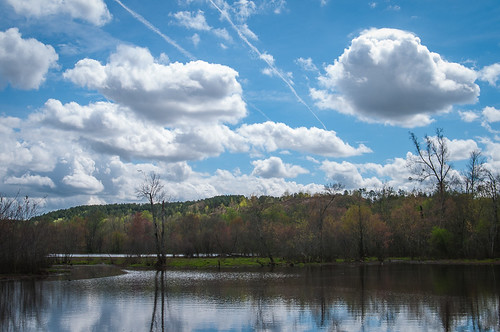 This is the “lake” for which Constitution Lake Park is named. In the distance you can almost see the landfills…

Venkman’s
It’s a damn good thing that I rarely get hungry because if I did last night I would have been hangry. I arrived at Venkman’s at about 8:15pm for my 8:30pm reservation and was informed that the Carapace show was running late and that I wouldn’t be seated until at least 8:45pm. I was finally seated at 9:00pm and ordered a late dinner.

I ordered the pastrami on rye sandwich, which came with french fries, as well as a side of chanterelle mushrooms served on yellow grits.

The food was good, but not stellar. First, for $13 I want more pastrami on my sandwich than just a couple of slices dammit! I don’t expect a mountain of meat a la Katz’ Deli in New York, here’s a Google Image Search if you’ve never been lucky enough to eat at Katz’, but I do expect to see the meat! The fries were plentiful and perfectly cooked, but I had to wait to eat them because I had to request ketchup. The grits were a complete disappointment; served scantly topped with mushrooms the grits were, um, gritty. Perhaps it was the larger grind (milling?) of these grits, but to me they seemed undercooked. And when I requested ketchup I also had to request a spoon for my grits. I may be a Northerner who knows little about eating grits, but it’s normally done with a spoon, right?

With the exception of the inevitable chattiness occurring around me the Jazz Jam was a success. The Jazz Jam is a weekly jam session organized by trumpeter Joe Gransden. During the entire night new musicians came on stage and played whatever instrument he/she had brought along. A few times singers joined the band and would belt out a tune.

Would I return? Absolutely, but unless the food improves I shan’t be waiting until 9pm to eat again in the future. Next time I need to figure out a way to get a table closer to the stage, for as a singleton I was sat at the two-top furthest away from the stage.

I’m Gonna Wash That Dirt Right Outta My Clothes
Don’t recall when the last time I did laundry, but I know that tonight I will be making an appearance at the lavanderia. I’ll most likely cap my night off with dinner at Pollo NorteÃ±o as well.

5 Responses to Slowed Down