Not Always As Planned

You would think that at the advanced age of 51 I would realize that things do not always go as planned. The jury is still out on this…

Well, That Was Different
On Saturday I felt fine and rode like shit.
Last night I didn’t want to ride, but then wound up riding fairly well.
It makes no sense at all.

Last night I drove the bicycle up to Peachtree Bikes in North Buckhead for their Monday night recovery ride. Forgetting that I needed to be at a location sixteen miles from home, at a time when Atlanta traffic is usually a mess, I let Google navigate me to the shop. I’ll be damned if I didn’t arrive within one minute of my predicted arrival time!

Last night’s ride was well-attended, and included my (former) co-worker Al, and Catherine (aka “Saddle Sores”). The ride is short, ~20 miles, and slow, ~14 mph, and the group stayed together fairly well. At one point I (selfishly) put the hammer down on Mount Vernon, a multi-mile 1% downhill because I was feeling my oats.

I noodled with the idea of going for a Stone Mountain ride this morning, but didn’t do it. The cooler, drier air would have been great to ride in, but I have other things on today’s agenda (like writing this blog post!).

Flickr Pics Of ITP
In a twist of theme today’s photos will be shots of me, rather than shots by me. These photos were taken during the Vermont trip. Longtime readers of this space will have little difficulty picking out yours truly in the mix. 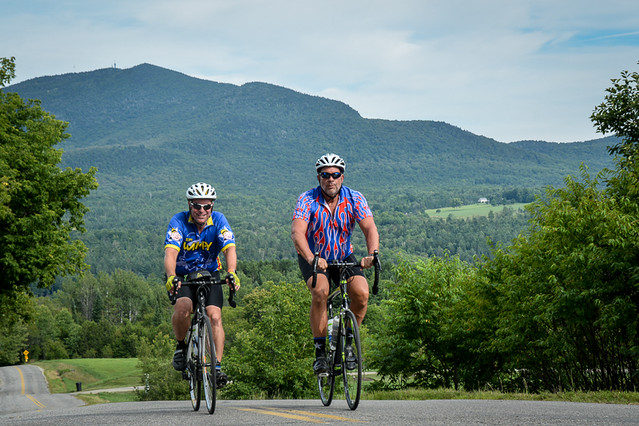 This is me and Bob, my roommate for the week. I could tell you that we had ridden over that mountain pictured behind us, but I’d be lying. 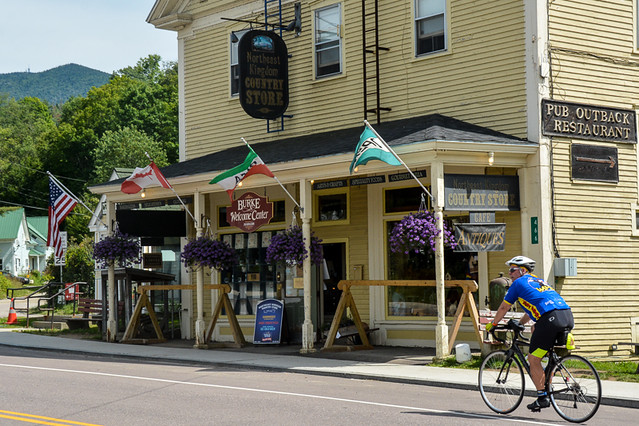 This was the day I experienced my flat and finished alone. To be fair, I was looking for a specific pub, the one that is pictured next. 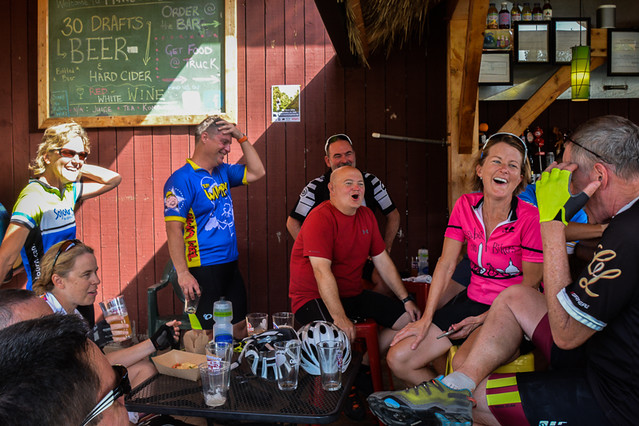 This was at Mike’s Tiki Bar. I have no recollection about to what we were reacting. I’ll blame the beer.

btw – you can tell from my Team Wimpy jersey that these three photos were taken on the same day.

“When I Ride I Take My Beer Seriously” 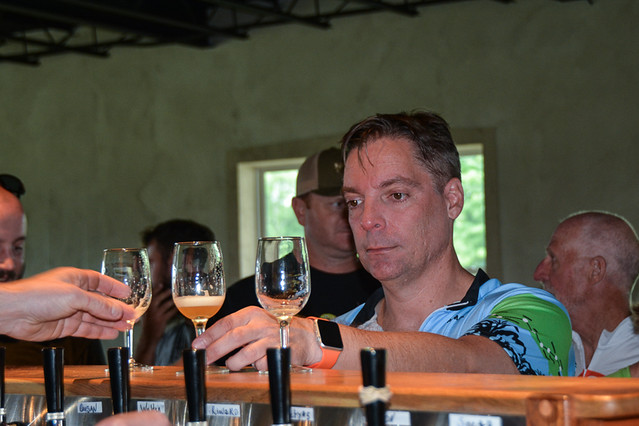 Taken at the Hill Farmstead Brewery. Why I am never included in People Magazine’s “Sexiest Men Alive” list still puzzles me.

I’m Reading A Book, That I’ve Electronically Checked Out From The Library!
Without doubt 2016 will go down as a monumental year in my life. Hell, how many times does a person get to quit a company with which he/she has toiled for nearly twenty years?

At the suggestion of a friend I am currently reading Moonwalking with Einstein: The Art and Science of Remembering Everything

(pssst, that’s an Amazon Affiliate link, so if you happen to click on it and then buy something from Amazon I’ll get a few pennies. Come on, I’m unemployed! 🙂 )

Look at me saving money and using public resources for which he has previously, and continues, to pay taxes to support!

I’m on target to complete at least five books this year. For many of you this is a pittance, but for me who all-but gave up recreational reading a young age, this is a revolution.

Binge Watching “Silicon Valley”
One reason I haven’t read more books is because I love watching videos. In this age of mobile electronics this is so easy to do…

I am currently binge watching my way through Silicon Valley. A few days ago I managed to finish up Season 2. Yesterday I bought Season 3 on iTunes (it’s not available for checkout from a library) and have watched the first four episodes — thanks, insomnia!

It’s A German Study Day
I’ve managed to avoid doing any real studying of German since last Tuesday’s class. Bad Paulie, very bad Paulie. So I am planning to spend the remainder of today, that which occurs between the completion of this blog post and class time at 18:30, sans the time needed for hygiene and nutrition, studying for tonight’s class. I will also wait until the last possible minute to park at Colony Square to avoid incurring another ridiculous parking fee.

7 Responses to Not Always As Planned