I’ve awoken in the middle of the night again and decided that that blogging at 4am was a great idea. Why not, right?

Laundry, Library, And Riding? Oh My!
Apparently my Spanish is worse than my German as I ordered my usual “1/4 pollo norteÃ±o, pechuga y ala” and the waitress seemed to understand my order, even repeating it back to me. However, I did not get the breast and wing as ordered and instead received a thigh and drumstick. Had I recognized this prior to thanking her for my meal, never to see her again, I would have rectified this situation toot-sweet. Related: the thigh and drumstick were tasty, but no breast and wing.

After my meal I returned to doing laundry. There were nervous moments during yesterday’s routine exercise:

From laundry in Chamblee I transitioned to a library in Sandy Springs. While sitting in the library I inexplicably received two phone calls that I could not answer because I’m not one of those uncouth animals who performs this sort of thing within the sacred halls of a library! Ignoring modern technology as much as I could I managed to do a few hours of German studying in preparation for tonight’s final B1.1 class, which reminds me that eight weeks have summer have passed in a blink of an eye.

The night’s last task was to get some exercise in the form of the Monday Night Recovery ride which was being led by ITP-Reader Al for the first time. It appeared as the Cycling Gods were against him as during our ride two riders experienced chain loss, and one did an imitation of Arte Johnson in the form of a low-speed topple. We collectively managed to finish before dark set in, exactly at the group’s target average speed of 14mph. The night’s ride only covered 19 miles so my three-day total is 105 miles, still not bad. 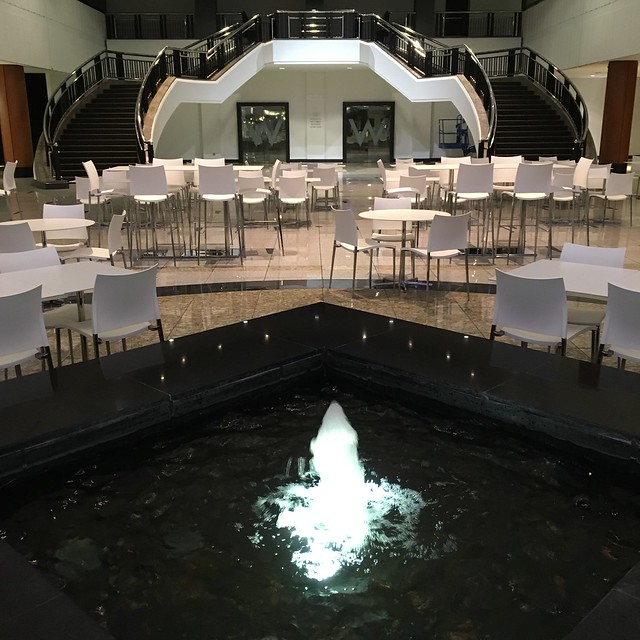 While I was inside Colony Square last Friday the symmetry of the hotel-end of the plaza struck me and I just had to take this shot. I’ve long-since questioned why the W hotel sealed off the second-floor entrance to the hotel space when they took occupancy, but it helped me as that area darkened itself nicely for this photo.

Really?
You’ve probably heard the news that Gene Wilder passed away yesterday. Forever I have had the image of him with Gilda Radner, who passed away in 1989, together etched in my mind.

Did you know that Wilder is survived by a wife, Karen Boyer, to whom he had been married to for the past twenty-five years? I had no idea.

Lunch, Library, Haircut, And German Class? Oh My!
It’s a rest day for the Vuelta, it shall be a rest day for me as well, at least in terms of exercise. As you can see from this section’s title there are many items on my agenda today.

Bookending some more time in a library studying German, I will be having lunch out and getting a haircut. In addition to it being time for a haircut I want to ensure that I look my best just in case I am recognized as “The man with his finger on the pulse of Atlanta, Inside The Perimeter” whilst I wander throughout Hartsfield tomorrow.

While at Colony Square tonight I shall also be plunking down my Euros for next quarter’s B1.2 class which won’t start until October. Looks as if I’ll have some Tuesday nights available for awhile.

And now it’s 5am. I think I’ll try to get an hour’s sleep before starting my day again. Have a great day friends!