Packed And Ready To Go

I’ve packed my bags and am ready to go. Last night I referred to multiple weather forecasts, one for Winter Park and one for Denver. Not surprisingly the forecasted high temperatures for a town in the mountains is lower than that for a city that is a mile high — by a good 15°F. I think that I’ve packed correctly.

There should be blogs posted (week)daily while I am in Colorado, but like Germany, Iowa, and Vermont before it, I will be blogging via iPad so the posts may be short and not contain many links or photos.

Oh Chick-fil-A
After getting my hair cut yesterday afternoon I scurried to get to Colony Square from Ansley Mall with a mere twenty minutes to spare before the start of my final German B1.1 class. I figured that Chick-fil-A would be the best (read “quickest”) option, until that I discovered that at 6:10pm I was ten minutes too late because they close at 6:00pm.

My only other option for a quick meal was the Moe’s in Colony Square, perhaps the Moe’s I dislike the most. This Moe’s also closes early, so by the time I order the food it’s quite old (stale) with no hope of getting anything fresh. My burrito was as disappointing as I expected it to be.

German class was fun; wine was consumed, jokes were made, and most of us vowed to see each other again in a month’s time for the beginning of German B1.2.

There must have been some sort of concert/event in Piedmont Park (or perhaps at Atlanta Botanical Garden) because there was a very long line of cars trying to get out of the Colony Square parking garage around 9:30pm. Because of my extensive knowledge of the parking garage’s traffic pattern I was able to take a circuitous route and (legally) cut in line, getting ahead of at least ten cars. We all sat patiently, and then not so patiently, as the car at the head of the line either couldn’t, or refused to pay to get out. Ugh. 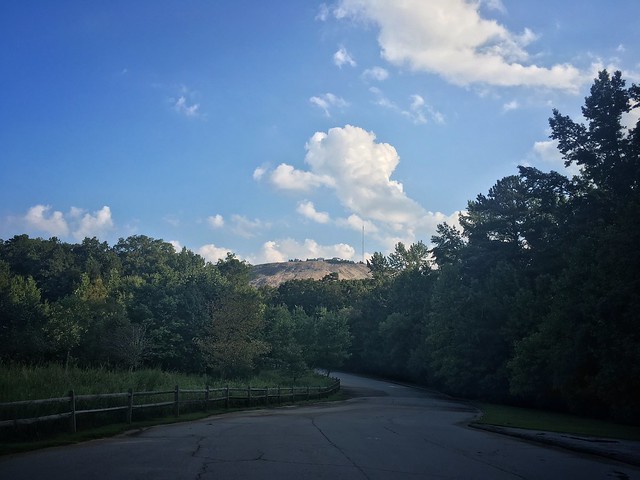 I don’t take this shot every time, especially because I don’t ride the “outer” loop every time. However, when I am riding well and don’t mind taking a respite, I take this photo.

If I Wanted To Sell The ITP Estate Now I Think I Found An Interested Party
Yesterday afternoon I received a voicemail on my landline, one on my cellphone, as well as an email from the same person inquiring about purchasing the ITP Estate. In past years I’ve gotten the odd call, or slip of paper left in the mailbox, but never a three-pronged approach such as this.

Am I selling? Probably not as my life is in a big limbo currently and now is not the time to make uninformed, knee-jerk decisions. Besides who’s going to rent to a person that has no job? 😉

My Goals For The Next Week
In addition to having fun, I’m hoping to finish reading “Moonwalking With Einstein” as well as doing a single reading pass through “English Grammar For Students Of German”. With the prospect of a month without German class I am going to try and routinely study so that I don’t feel completely lost by the start of the next session.

That, drinking copious amounts of Colorado microbrews, and blogging.

17 Responses to Packed And Ready To Go