Apparently only on the road from Winter Park to Fort Collins…

Colorado InviHash 16 Is In The Books
Because I slept through all of Sunday’s activities I was well rested and rather hungry by 8:00am. I was first in line for breakfast.

After breakfast we all packed up our rooms and headed out for a mountain bike ride. ITP-Reader Barb, Allan, and myself rented bikes and Michelle and Drew had theirs along with them. Of course I was completely unprepared so I rode in running shorts while wearing Chucks as well as the sunglasses that I purchased from the bike rental store. Thankfully we weren’t going to attempt anything too hard, which is not to say that it was easy riding.

We rode around some fun trails for a few hours and I was pleased with my effort, having to dismount only once due to the lack of clipless pedals. (I must admit to dismounting a few times because the climbs were too steep.) However, I quickly realized that I won’t be giving up road riding for mountain biking any time soon.

After all was said and done we had a great lunch in Winter Park before driving though beautiful landscape from Winter Park through Rocky Mountain National Park to Fort Collins. In Estes Park we saw a large, male elk walking though a parking lot. Barb and Allan saw a big-horn sheep on their journey. 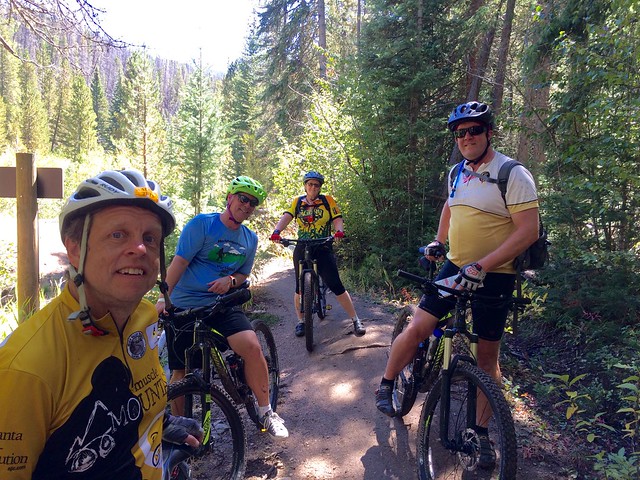 Except for Michelle, who gets credit for this photo, here is the group of knuckleheads that went out mountain bike riding yesterday. Of course yours truly is in the blue shirt looking goofy. 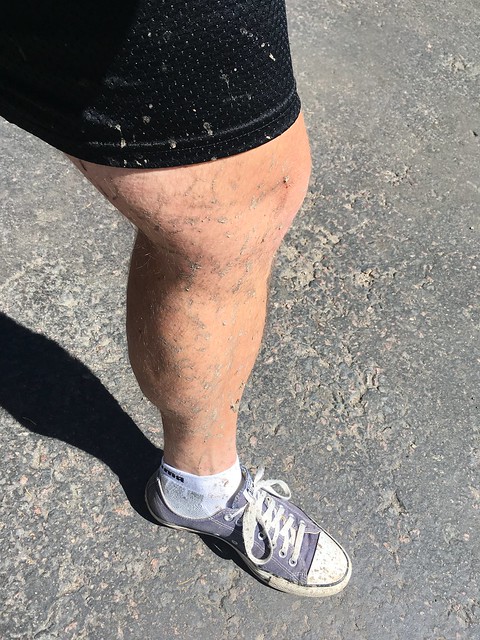 At day’s end my leg was splattered nicely with mud, which means my mountain biking form is horrible. Related: look at that awesome calf!

Dinner In Fort Collins
After settling in the five of us headed to a place called “Otto’s” in Fort Collins for some beverages and thin-crust pizza. With so many beers on their list I considered looking for something special, perhaps with pomegranate, but instead went with a peach pale ale. It was funny that I was not the one ordering drinks that they did not have, which is often the case for me, that honor went to both Barb and Allan who were thwarted a few times before getting a beverage served to them.

My Last Full Day In Colorado
What is happening today? I am not 100% sure.

Frankly, I don’t care. I am going to have a great day regardless of what we wind up doing.

I hope that you do too.

7 Responses to Where’s The Asphalt?