So Many Things In Flux

For a person such as myself who enjoys consistency and routine this year has been tumultuous.

Change In The Weather
Friday afternoon I headed out for happy hour around 3pm. Why so early? Because my plan was to walk the five miles from the ITP Estate to The Vortex in Midtown. My plan fell through when only two miles into the walk, and at the Inman Park / Reynoldstown MARTA station, I was already sweating. I hopped the train and finished my journey by jumping off at North Avenue and walking the rest of the way.

Happy hour was fun. Since the colder weather had yet to arrive we sat outside to avoid the stench of cigarettes that lingers within The Vortex. I nearly pulled a Margret Mitchell by having to dash across Peachtree in order to hail my Lyft whose driver never saw me waving my hands in the air like I just didn’t care from the other side of the street. He was an “interesting” driver, telling me all about his previous drug-abusing life on the drive from Midtown to East Atlanta.

Suffice to say that I could’ve done that walk on either weekend day without sweating nearly as much.

Slow, Cold, Weekend
The only time I left the ITP Estate this weekend was on Saturday to do some regifting/recycling. On Saturday afternoon I drove two boxes of “things” to Goodwill on Piedmont and dropped them off. From there I drove up to Target and Home Depot on Sidney Marcus to attempt to recycle some batteries; apparently that’s not a “thing” any longer. After failing that task I drove up to the Pearle Vision near Lenox Mall where I dropped off two pair of old prescription eyeglasses that are no longer useful for my eyes. Pearle collects glasses and when they have a boxful they ship them off to One Sight who repurposes them. 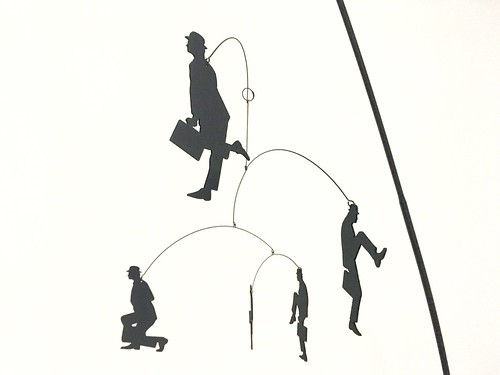 I purchased this mobile online a few years ago. While smaller in scale than I thought when purchasing it, it amuses me. I am posting this today to remind myself that in the face of adversity that I need to smile and laugh more.

Land Of Ancient Technology
Since I was hanging around the house on Saturday I dusted off two “ancient” technologies — a portable CD player, and a Blu-Ray player. While I was gathering the things to box up for Goodwill I played a few CDs on my living room stereo. It’s been a long time since I listened to music this way and it sounded great. Later in the evening I decided that I didn’t want to watch any more college football so I fired up the Blu-Ray player and watched a DVD’s worth of TV Funhouse, a show I used to watch on Comedy Central back in the early 2000s.

My only regret on Saturday night is that I fell asleep before remembering to use the oldest electronic media in the house — radio. It’s been far too long since I listened to H. Johnson’s “Jazz Classics” show on WABE.

Cook’em If You Got’em
Staying home on Saturday and Sunday also lent itself to doing some cooking. On my way home from doing aforementioned chores on Saturday I popped into the Kroger near Emory and picked up some groceries. On Saturday night I cooked some sausages and toast for dinner. Yesterday I microwaved some frozen pancakes for breakfast, made sausage/chicken jambalaya (from scratch) for lunch, and heated up a large can of potato soup and ate it with some frozen biscuits as my dinner.

Medical Update
My medical situation hasn’t changed. Unfortunately this means that I still have the lump on my eyelid and will forever unless I do something drastic. And it was a good thing that I didn’t watch the Florida v. LSU game on Saturday because I’m certain that my heart would’ve stopped toward the end of the game.

My mom is now in a physical rehabilitation facility. If all goes as planned I will be around Atlanta for Thanksgiving. Assuming the Thanksgiving plans don’t change I will be eating at Sanitary’s house as I’ve done for about the last handful of years.

13 Responses to So Many Things In Flux