Why yes, the look of this site has changed. My hand to change the layout, including removing much of the customization of the last layout, was forced this weekend when I received an email telling me that someone has hacked my site and injected code into it. Since I couldn’t figure out how to edit the files involved, I chose to nuke-and-pave and started again. If this blog goes on, I am still contemplating its demise, I may wind up switching to a fully hosted and managed provider such as SquareSpace.

#SUCCESS
On Saturday I had to fun times hanging with friends. If you were not part of either of these events then we need to plan something soon!

After I finally found parking on Saturday just before noon at the shopping center that houses OK Cafe I met up with six other once-upon-a-time Flickr members — John, Joe, Lee, Dave, Jason, and Andy. We had a really filling lunch and reminisced about old times and tried to ensure that it would not be so long until we meet up again.

From lunch I drove through more Atlanta traffic as I tried to wind my way from Paces Ferry at Northside to Briarcliff in order to fill the M6’s tank with gas. My mistake was taking the surface streets around Christmas.

On Saturday night I ditched the car and chose my feet to meet up with Hank and Bill at Argosy in East Atlanta Village. Because we met at 5pm (they wisely Ubered to EAV) we easily found seating at the bar. Many beers and a Nashville Hot Chicken Sandwich later we separated, they hailed an Uber to go back nearer their houses, and I started walking home. 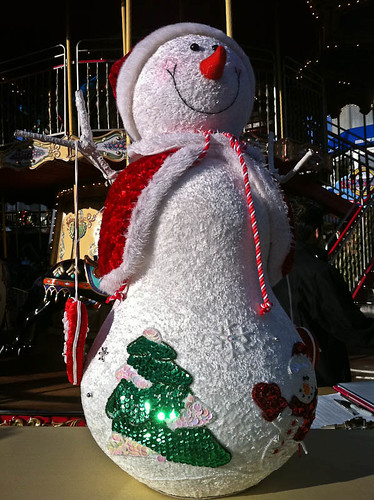 ITP Flickr Pic
“How To Get Fat In One Simple Step” (Atlanta, Georgia, United States) 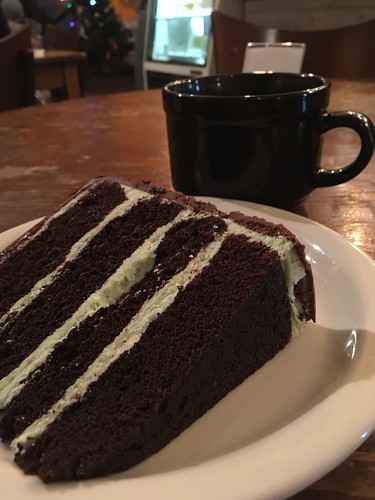 #FAIL
I made it as far as Joe’s Coffee Shop where I stopped for a huge cup of coffee and that too-large piece of chocolate-mint cake pictured above.

As I sat there mulling my existence I saw yet another woman who I thought was rather attractive save the tattoo on her neck. Boo! Just think, if I shut this blog down you won’t have to read about my whining any longer.

After drowning my sorrows in a cup of coffee I headed out. Hey look! There’s the Christmas tree that ITP-Reader Jenka mentioned! My photo was completely blurry otherwise I would have posted it today.

And to add insult to injury I felt sick all night long after eating that much dessert. Phooey!

#COMPLETEFAIL
I won nothing at the big bingo night last night, which is too bad since the lowest payout per game was $100 cash. The highest payout, for the last game, was $500 cash. I really didn’t even get that close. The games were held at a place called “Hurricane” on a road called “State Bridge” in a land far, far away. The bar was okay except for its location, insufficient bathroom facilities, and the fact that their kitchen shuts down at 9pm on a Sunday (if not all days). It was a good thing I asked about food since I needed some in me last night since I had been planning to eat during bingo.

For the last forty minutes I have been sitting in complete darkness as the power in my third-world portion of the USA has gone out again. I feared that it was only my house, yes I pay my bills, for that is how this house treats me. Upon going outside I saw that no one has electricity. It is with the 51% battery life of my iPad and cellular service that allows me to finish today’s post.

I had planned to go out early, hit the gym, and then do laundry but the power outage has put the kibosh on that plan. Instead I am back under the covers trying to stay warm since no electricity means no heat.