Another cold morning, another lazy me.

It Just Wasn’t The Same!
You’d think that going to Horizon Theatre with one woman would make it the best year ever, I went with two women last night. I picked up Betsy and Terri last night and we ate dinner at Wrecking Bar Brewpub before going to the Horizon. But alas it wasn’t, and it certainly wasn’t anything my fine friends did.

I’d heard from Betsy on Monday night that Horizon had changed up the play this year, having the lead actor speak all of the lines. Here is their official statement:

LOVE SANTALAND? Itâ€™s the same show you love, but this year with a new twist!

HO, HO, HO, THIS WAS WRITTEN AS A ONE-PERSON SHOW.
BUT WE FOUND IT WAS SO MUCH BETTER WITH THREE.
OUR ELFIN HELPERS STEAL THE SHOW AND GIVE US HO, HO, HOS
BUT THIS YEAR, THEY MUST DO IT SILENTLY.
THE AUTHORS OBJECTED, SO WE GENUFLECTED
AND GOT CREATIVE WITH OUR TALENTED CREW.
SO NOW, CRUMPET HAS THE WORDS, THE SIDEKICKS ARE NOT HEARD
AND THEIR COMEDY IS REVEALED IN WHAT THEY DO!
SO ITâ€™S TIME FOR A FUN RIDE WITH LAUGHTER ON OUR SIDE
AND A SANTALAND THATâ€™S BRIGHT, SHINY AND SOMEWHAT NEW!

The authors of The Santaland Diaries conceived it as a one-person show, and have required that we revise our production to adhere to their original intention and the original script. So the comic antics of our sidekick elves are hilarious, but non-verbal this year.

I won’t return if this is the case next year. 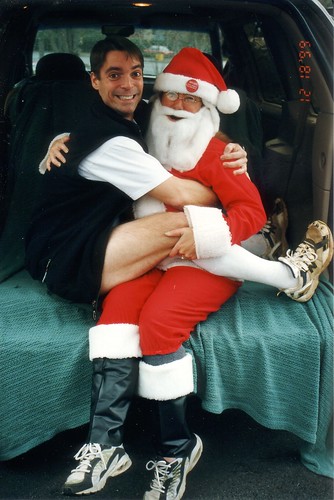 Ah my first year of hashing. Look at the hope that my younger and thinner face had back in those days.

ITP Flickr Pic
My intent today was to include a photo of something I’ve never seen before, which is not that hard to do but I didn’t get around to doing. Sorry, but it’s too cold out currently for me to go and take a photo of it.

When I was going out to the show last night I was somewhat flabbergasted as I sat in my car and watched the following. I saw a squirrel inching its way down a tree near a bush that appeared to have a fallen branch within it based on the color pattern I saw. And then I watched the squirrel jump onto this bush and proceed to strip a long stretch of bark from the bush using its teeth and then carry the bark to its nest. Apparently what I thought was a fallen branch was a branch of the bush that had numerous such strips of bark removed from it.

Here the damage that the squirrel managed to do: 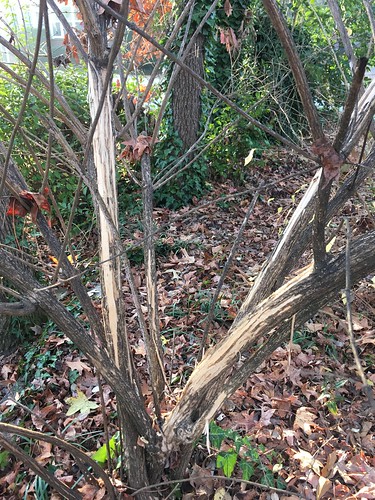 One Day On
I’m going to have a very busy day.

I will be starting my day at LA Fitness, getting an hour in on a stationary bicycle.

From LA Fitness I will be heading to the lavanderia to do a ton of laundry.

I need to go to Lowe’s to recycle some old fluorescent bulbs, and to buy a new light switch to replace the one crapped out, appropriately in the bathroom, yesterday. Look at me! Fixing something immediately! Of course I say this before the actual fix is made. For all I know the wiring between the switch and the lights was gnawed to death by rats and squirrels and will have to be replaced.

Finally I will swing by a Dekalb Public Library and drop off the movie Meru, that I watched yesterday. This documentary was very well done and I recommend watching it if you like movies about mountain climbing and friendships.

One Night Off
Staying home tonight to watch Christmas movies, eat copious leftovers, and relax. I have something planned for the next four days/nights.