Slowly my eye returns to normality. Slooooooowly. The swelling still exists, as does the remnants of the procedure, but at least I can function for most of the day again. Which is good. Now if I could just stop feeling as if there is something constantly in my right eye… And if I could figure out how to get rid of that dull pain that has crept into the lower half of my body too…

I Must Do Laundry Today
I have a ton, not a literal ton thankfully, of dirty laundry. It’s supposed to get really cold and snow a bit in Southland this weekend (proving there really is a Santa Claus?) so I need the flannel sheets to put back on my bed. 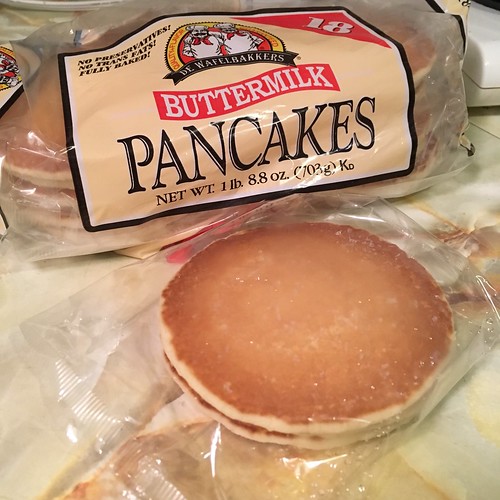 You can, and should be, purchasing these frozen pancakes at your local Kroger. They are tasty, convenient, and best of all the eighteen pancakes come in six, wrapped packages of three pancakes which make a perfect breakfast (at least for me).

The Old Salt
I’m not sure how it happened, but the jambalaya I made last night was too salty. And before you say “You probably put too much salt into it.”, I know, but I have replayed the two salt additions that are called for by the recipe in my mind many times and can’t envision putting too much in.

With the exception of over-salting my modified jambalaya, which I am calling “funbalaya” because I substituted many ingredients, was delicious. Here is how I free-styled last night:

Emeril Lagasse’s “Andouille and Chicken Jambalaya” may be the recipe that I have made the most in my lifetime and is usually my go-to dish when I need to feed those that eat pork.

I Am Going To Zwift
Upon my return from Chamblee I am going to stop off at Dick’s Sporting Goods, or perhaps Performance Bike to purchase a bluetooth speed/cadence monitor to attach to my bike as I start to use Zwift. I need a new diversion since I can’t find any source for “The Great British Baking Show”, though I could start watching a new, unseen-by-me series of “The Amazing Race” this year.

Now that my eye has gotten somewhat better I need to start exercising again. Unlike ITP-Reader Barb’s lovely YMCA, in which she can get a Spin bike in January 🙂 , I am a member of LA Fitness, which is undoubtedly jam-packed with Resolutioners this month. So, I want to do my riding at home, you know, like I did last January. Besides, this might actually get me to clean up the basement again as well.

13 Responses to Creeping Toward Normality