I am once again ramping up my efforts to get rid of material possessions that do nothing but weigh me down. One of my big targets this week is to go through my CD collection and keep only those that have sentimental value, are unavailable digitally, or that I know I will listen to entirely after putting it into a CD player. The “plan” is to take a large box of CDs up to Criminal Records in Little Five Points to see how much they will offer me; I don’t think it will be a lot of money, but I’m not using them so why should I hold onto them?

I am also hoping to have dinner tonight with a friend, and former coworker, who has experience selling things on eBay. Stay tuned…

I’ve Been Living In The Past
Perhaps detrimentally to my mental health I have been thinking a lot about my past and beating myself up regarding all of my missed/blown opportunities in my life; naturally most of these have been regarding relationships, but there have been other things as well. I think I’ve been doing this because I have been spending a lot of, perhaps too much, time alone.

A Little Bit Of Atlanta In Pawnee?
I mentioned that I’ve started (binge) watching Parks And Recreation. During the first few seasons there was a still image used in the opening that kept nagging me. I’m sure that I am not the first one to document this, but I finally put two-and-two together over the weekend. Here is a photo of that image that I took of my tv (sorry about the moire pattern there was nothing I could do about that): 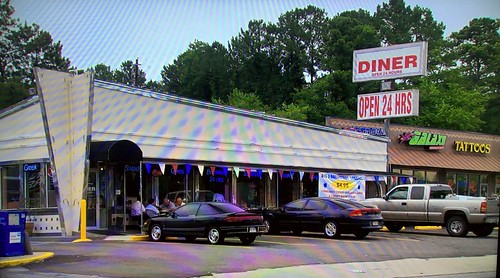 and here is a Google Maps screenshot of the location that I recognized: 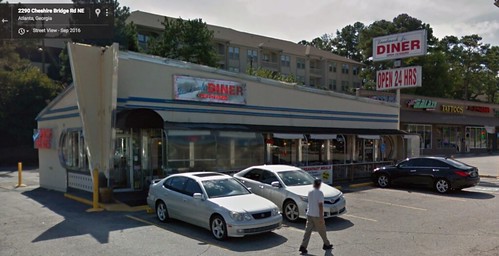 Yep, it’s the diner next to Galaxy Tattoo on Cheshire Bridge!

Quitting While I Am Behind
I’m not even a genuine Packers fan but that game caused me much stress so I had to give up watching in the third quarter.

. I looked that the User Guide and thought that I completely understood what appeared to be a simple install. The first fail I had was that neither of the provided mounts for the cadence magnet fit into my pedal. I chose to skip this and get the speed sensor up and going so I clipped the speed magnet onto a spoke and started spinning the wheel; that was the second failure. The third failure occurred when I screwed up a couple of zip ties, for which I expected to have more of in my collection of spare zip ties but do not. After getting increasingly frustrated I decided to give up for the night. I went back upstairs and reread the User Guide to see that I had done something wrong. I went back down into the basement to fix one of my errors but could not find the magnet for the cadence sensor. I searched for a good five minutes to find the cadence magnet to no avail. Finally I looked at the bottom of the headlamp that I was holding in my hand to use as a flashlight only to find the cadence magnet attached to it. At that point I gave up. Neither sensor is working as I write this portion on Sunday night, and frankly I’m okay with this for today.

Big Week Ahead
This is going to be a big week for me. One day later in the week, I am unsure which yet, I am supposed to have a technical interview. You may correctly assume that I am hoping that it goes well, as I am ready to restart my career.

Oooh, for whom will I root next week in the Packers v. Falcons game? You’d think that living inside the perimeter would make me automatically root for the home team. Not so fast my friends… I rooted for the Packers back in October, and I planning to be in the presence of Packers fans on Super Bowl Sunday, so I think that I will be rooting for the visitors.

Happy MLK Jr Day. Hope that if you are working today that you have an easy day.