I Have An Office Again

On Saturday I cleared out the old guest bedroom into which I had placed a filing cabinet and another cabinet in which I keep office-type stuff. I did this to clear out space so that I could build and then position my new work desk, the one I purchased from IKEA last week.

Uncharacteristically Ruthless
In reconfiguring the office space I moved out a dresser, the one my parents bought for my bedroom when I was thirteen years old. I am planning to put the dresser on the curb and see if anyone else wants this piece of furniture. At nearly 39 years old you may think that this is now some sort of antique, but it was purchased at Sears so I don’t think it’s worthy of a visit to Antiques Roadshow. 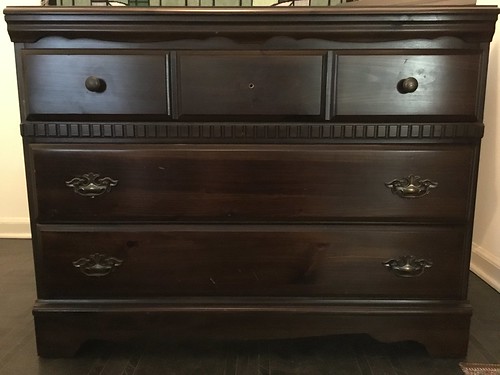 Yes, it’s missing a knob on the top drawer; there is a screw but I’ve long since known where the third knob is. (insert joke here)

Claim this piece and pick it up very soon however, because it’s going on the curb this weekend. Of course if you want to anonymously claim it just wait until I kick it to the curb.

Also on Saturday I walked a bag of electronic recycling to the EAV Farmers Market location to recycle the contents. Included in the bag was the portable AM/FM radio I bought in Gainesville in the late 1980s when I first started going out for runs. The radio still worked, but was incredibly finicky and would only play in stereo if you held the tuning wheel just right. In KonMari lingo this behavior did not “spark joy” in me, so to the recycling center it went.

I have identified a bunch of other things that will be going to Goodwill this week as well.

You may not know this about me, but I am a sentimental person, so parting with my past tends to be a bit difficult for me.

Because My Feet Don’t Get Fat
One of the problems I’ve had shopping for clothes, which if you saw the amount of clothing I owned you’d say I had no problem shopping, is that my body has grown and shrunk considerably over the past twenty-five years.

Except for my feet.

Which is why I actually like shopping for shoes, as the photo below will attest. 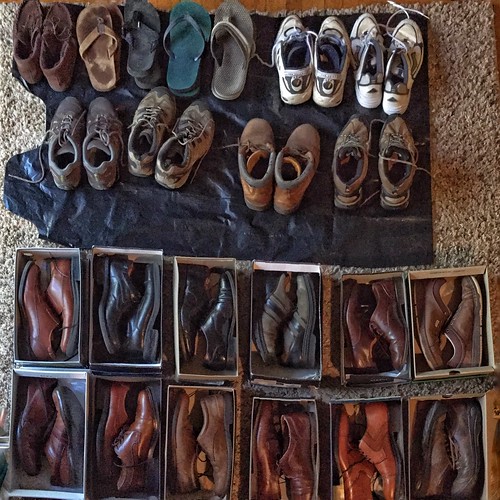 As you will read below these fancier shoes may be seeing the light of day more often.

I May Have Another Office As Well
On Friday I accepted a verbal offer from the company with whom I interviewed on Thursday; today I will be receiving a formal offer. I am hoping to make it official ASAP, and may provide more details in this space once I do.

This is called “burying the lead”, kids. ðŸ˜‰

Looks as if I am going to have to practice getting up early again.

18 Responses to I Have An Office Again