Yesterday I mentioned practicing my mobile photography routine, today I am practicing my mobile blogging routine. In case it hasn’t become evident I am not bringing a “computer” with me to Europe next month. So, if you want to read about, and see photos from, my travels I have to refine my skills. Man I wish Apple had announced a new iPad Pro last month that I could buy and to which I could pair a keyboard.

Laundry, No Burger
I spent nine hours in the office yesterday so I arrived at the Waschsalon a little later than I would have liked. Upon my arrival I was fortunate to get all of the machines I needed for my two large loads, but by the time I was done all I wanted to do was head home.

The idea of going home instead of going out to eat had two benefits going for it â€” I would save money, I wouldn’t consume as many calories â€” one of which actually happened. Had I not convinced myself that I was still “hungry” after eating my ham and cheese sandwich I never would have eaten the Tupperware’s worth of leftover jambalaya. Too. Much. Food! I will say that I enjoyed each however. 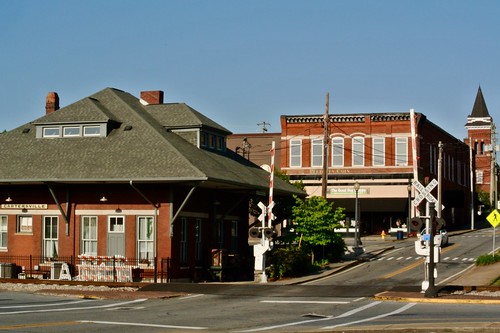 After finishing my breakfast on Saturday morning I walked around Cartersville, snapping some photos.

A Late Night Of German Studies
After stuffing my face and belly, putting away all of my clean clothes, goofing off for a while, and then talking to my mother on the phone for thirty minutes, I had to buckle down and get my German homework done. I tried multiple times over the weekend to do it, but the subject matter we have been discussing in the past six months have not interested me. Last week we started a chapter on the European Union. In theory this could be an interesting topic, but the way our book presents it is dry and I don’t see how memorizing EU-related vocabulary is going to be very helpful to me at this stage of my German language learning.

I Need To Start Exercising Again
Even if I can convince myself to eat less food I need to find a way to exercise in order to burn calories. Exercise could also be beneficial for the strength/stability of my hips/legs/knees as well.

Have a great Tuesday.

6 Responses to Blogging From iPad