There aren’t many Tuesdays without German class for me these days, today is one.

Because of the rising temperature in the office I skedaddled early. Technically I was working from home, in reality I was working (out) at the LA Fitness in Decatur. Why the one in Decatur? Great question. I didn’t want to deal with parking and traffic by going to 5th Street or Atlantic Station, and I am not the biggest fan of Ansley Mall. 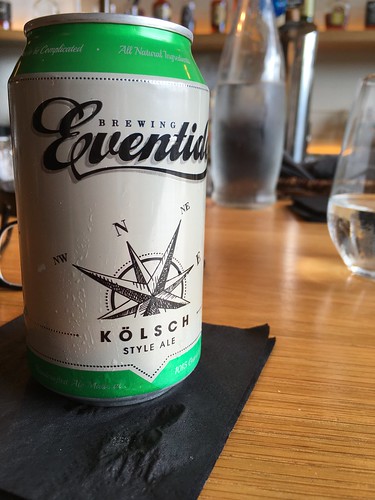 I have to tune my tastebuds to the types of beers served in Germany.

How To Ruin A Workout
From Decatur I fought a little traffic to Ponce City Market. The original plan was to abstain from eating until after my event, but clearly that wasn’t going to happen. I stopped into a restaurant and had two beers, one of which is pictured above, and a pile of flatbread. The event also offered some chicken bites, so I snacked on about eight of them while I had another beer. Good thing I worked out.

Paulie’s Tour de Failure
While in the office building of one company who passed on me I watched a presentation from another one who passed on me. To add insult to insult this company also declared that they were hiring at the end of the presentation.

The rest of the evening was quite interesting. I watched presentations from five other bike/tech related companies, and had a good discussion with the founder/inventor of Edison Electric Bikes. I also found out that Edison has opened a shop in Kirkwood, a short ride from the ITP Estate even on a non-electric bike.

Tonight’s Calendar Event
Instead of German class tonight I am going green! Well, I am going to an event called “Green Eggs & Ham: A Curbside Discussion of Corridor Revitalization in Atlanta”

Here’s the blurb about the event being held at Manuel’s Tavern tonight:

Green Eggs & Ham is an ongoing morning (usually) program of Generation Green of the Georgia Conservancy. Each event features a topical discussion with a compelling speaker or panel.
For our summer installment of Green Eggs & Ham, panelists and attendees will discuss the investment, design and community involvement necessary to revitalize some of Atlantaâ€™s most historic and culturally significant transportation corridors.

From Peachtree Street to Memorial Drive to Buford Highway to Howell Mill, Atlanta’s embrace of the automobile as the dominant mode of transportation is evident. But, changes are afoot. An understanding of the multi-modal needs and wants of Atlantans is growing and the many economic benefits of inclusive corridor planning are beginning to be recognized.

Join us for an engaging discussion with panelists from various organizations to learn about the changes that have already taken place within many of Atlanta’s transportation corridors and what we may expect to see across the city in the future.

13 Responses to Tuesdays With Paulie