“When I get back from vacation…”

You get the idea.

Nice Rack!
I have bought a coat rack… for my new office space at “XYZ Corp”. If you look at the photo I posted last wee you’ll notice that there is no place for me to hang up a jacket, or something along those lines. So I did something about this by ordering one via Amazon. I also ordered a USB charger for my desk as well.

Both of these arrived on Saturday, and will be taken with me when my time at “XYZ Corp” ends. 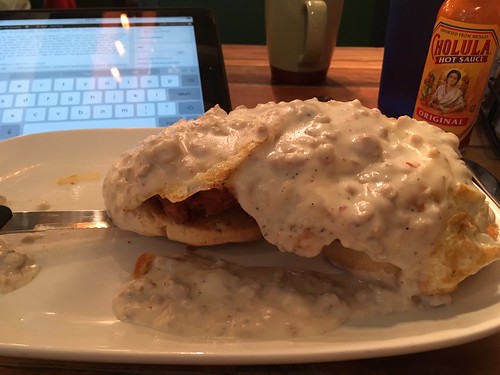 This was the breakfast I treated myself to after working out on Friday morning. It’s a wonder why I don’t lose weight. 🙂 To be fair to myself I did not eat lunch because I knew that I would be meeting up with friends for drinks and dinner on Friday night.

We three started the night at Eleventh Street Pub, which remarkably still allows smoking. After a few drinks we crossed the street and ate at Steamhouse Lounge as we consumed a few more beverages.

I Attended A Soccer Game Match?
Though I’ve started paying attention to the German Soccer League (Bundesliga) I have not had a yearning to go to an Atlanta United game. Earlier in the week I turned down a chance to go on Saturday night because I thought that I was going to have ridden 100km in Braseltion for Jackson Brevet and would either be too tired, or would rather be rewarding myself for my efforts with a big dinner and beer. When I woke up on Saturday morning I had no drive to ride, so I bailed.

Saturday was then going to be a day of chores, of which I did some, followed by going out for dinner. While executing this plan I received another offer to go to the soccer game and decided “Oh what the hell…”.

The offer came from ITP-Reader Bob, well technically Laura who doesn’t read this space. We made a plan to meet outside the stadium. I decided to park at the office and walk to Barrelhouse on 5th for a few pre-game beers and dinner, before walking to the stadium. A funny, not funny, thing happened as I was leaving Barrelhouse, the skies opened up with rain. WTF? Fortunately I was able to wait out most of the rain under a canopy.

The game was a lot of fun, but I doubt that I will be making and concerted efforts to return for more.

Yard Work Is Fatherfucking Hard Work
Yesterday was Fathers Day in the US. Unfortunately my father has been dead for twenty years now, and spawning a child has never been part of my life’s plan.

I woke really early and got out to beat the heat and do some yard work. I pulled volunteer growth in my “flower bed”, I took a weed whacked to the overgrowth of lawn on the front curb, I “pruned” a handful of trees/bushes which have gotten out of hand, and finally I ran the lawnmower over the grass. In all I was outside for about three hours and barely put a dent in the appearance of the ITP Estate.

When I get back from vacation I need to handle the maintenance of the ITP Estate.

It was good that I got out early, because not only did I beat the heat I beat the rain that arrived hours before it was forecasted.

The rest of my Sunday was spent indoors escaping the heat. Instead of celebrating Fathers Day with brunch or dinner out, I cobbled together meals for my expanding belly. Before I go on vacation I need to clear out the refrigerator and freezer as much as possible.

Waschsalon Night
Tonight after work I need to wash a bunch of clothes at the midtown Waschsalon. From now until I depart next week I’ll be handling tasks that I need to do prior to taking off.

Make it a great Monday.