As I bang out this blog post on my iPad Mini 4 with the Zagg Folio keyboard I am pleased to now know that my Skype setup on this iPad also works. I called my mother last night using the Skype iOS app and my Plantronics “Julie the Time Life operator” (google it if you are too young to get the reference) headset. The thirty-two minute call cost me a whopping 90 cents. Ha! As long as I can find reliable WiFi in Germany/Austria I can keep in touch with my mother for cheap.

Speaking Of Cheap
I left the office and headed to Midtown Wash where I was able find the machines I needed in order to get my laundry done as quickly as possible. Huzzah! I was done with laundry by 5:30pm, and having very little hunger at the time pointed the M6 toward East Atlanta. I considered stopping at Mexican(ish) restaurant and snack on chips, salsa, and queso with a couple of beers but the then I thought differently and headed straight home. When I finally had some hunger I boiled a box of elbow macaroni and mixed in a couple of cans of chicken breast and a jar of garlic-tomato sauce, making enough for dinner last night as well as three/four more meals (lunch today being one?).

For the rest of the evening I kicked around the house, put away my clean laundry, repositioned box fans, found the components needed for my Skype call, and watched an episode of last season’s Top Chef. (note to self: get TextExpander working on this mobile rig) 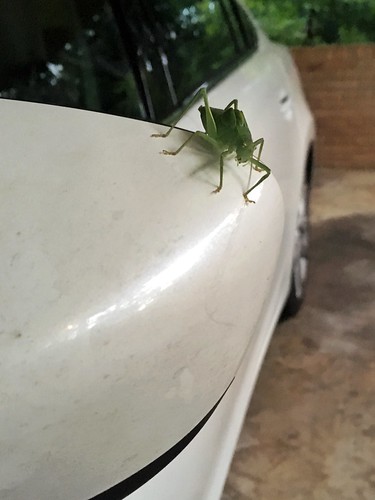 Yesterday morning I came out to find this guy (gal?) on the M6. Fortunately he (she?) was kind enough to pose for a photo before I had to shoo him (her?) off so I could head to work.

Things in the hood must be changing for this morning I saw the first slug (a skinny guy/gal) that I have ever seen in the eighteen years I have been living in the ITP Estate. By the way the German for “slug”, Nacktschnecke, is one of my favorite words because it literally translates to “naked snail”. ðŸ˜

Goodbye Spring
Though it’s felt like Summer in the ITP Estate for a few weeks now, Summer actually begins tomorrow (at least in the Eastern Time Zone).

Make it a great Tuesday gang!