In German: Today I travel to Vienna in Austria

I write this morning at 9:15am local, which is the latest I have started a blog post on this trip. I will write until 9:45am at which time I must pack up and make my way around the corner to the central train station where I will board a train to Munich, and then hopefully get there in time to board my train to Vienna. According to the train schedule I will have twelve minutes to go from platform 22 to platform 12 in Munich.

Yesterday was a mixed bag of German success. While speaking German I purchased my ticket to Vienna, and later in the day I did the same for my ticket from Vienna to Frankfurt next Monday. With tickets in hand, or in briefcase as the case may be, I am set for all travel from today through the end of my vacation. If I am ever wanton to visit this many cities in a single trip again I should have the forethought to purchase a EuroRail pass. Because I don’t really want to know I will not tally the amount of money spent on travel and lodging, at least until I start planning my next German journey. 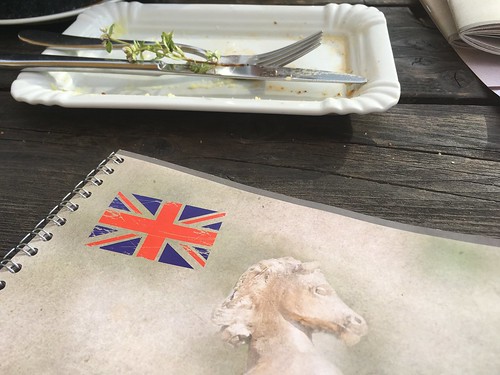 Yesterday my German skills failed so badly that I was given an English menu at dinner.
What you see in the background is the plate on which my three wieners and potato salad were served. I ordered a pretzel to go with this, and to my surprise I was gifted a second one because the waitress feared that the one I had ordered had never been delivered. With this food I drank two 0.3L beers. After a short walk looking for inbterersting things to photograph I found my way back to Brauhaus 1516 where I ordered my final Augsburg beer.

I was back in the hotel room before 9:00pm and fully expected to pack for today’s journey but I was wiped out and must have fallen asleep within fifteen minutes of my return. 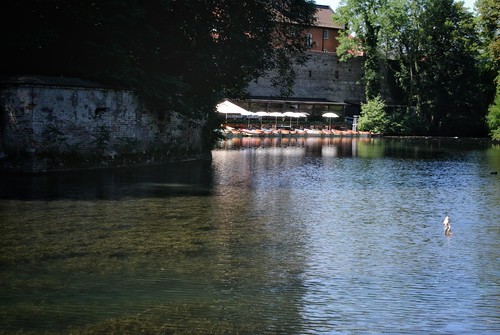 Like many places on the planet I’m sure that prior to the introduction of humans Augsburg was probably a very pretty place. Yesterday I walked about 8.5 miles around the city which is bounded on two sides by small rivers. Much of the architecture is too enclosed to photograph successfully, and the nature is mostly well-used city parks with rivers, streams, and trees. This water, which may have been redirected by man as a moat protecting the fortress behind it, is now full of fish and fowl. 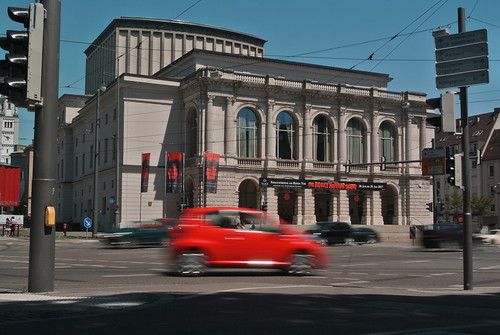 Of the buildings in Augsburg that I could shoot I believe this one to be a theater, which is now showing “The Rocky Horror Picture Show”. I took the opportunity to sit in the shade, attach a few filters on the Nikon 1 V1, put the camera on a tripod, and did a little slow-shutter photography.

It’s Gonna Get Hot In Der
It appears my hash hotel does not have air conditioning, at least that is not listed as an amenity on its website. Oh bother.

Speaking of heat, could y’all do something about getting rid of the heatwave that has plagued Atlanta before my return next Tuesday? Vielen Dank!

Happy Friday and glorious weekend to all. It’s unlikely that I will be blogging tomorrow and/or Sunday, but one never knows…