As you will read in the bits that follow these, yesterday was a disaster in my effort to improve my health and morale. There was one positive moment at least.

Sweet Jesus
I ate a decent lunch in the office, but then needed to get out. I had a hankering for something sweet and surely I could find a place locally that pretends to be an amazing sidewalk cafe like those that are abundant in Europe.

As you might expect my first stop was Cafe Intermezzo. I stopped outside, perused the posted menu, and was not satisfied. I moved on.

My next thought was to walk toward Piedmont Park. On my way I thought about The Nook. Before being seated I asked if they served desserts, they do, and like that I was seated in an air conditioned restaurant ordering this: 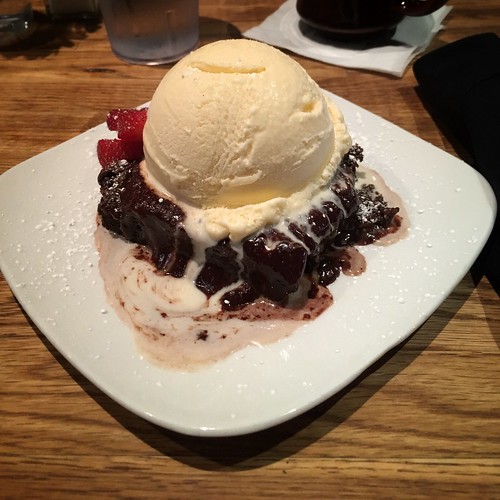 “Looking To See If ‘Chocolate Brownie With Ice Cream’ Is Listed After ‘Celery’ In My Diet Plan” (Atlanta, Georgia, United States)

Yeah, not exactly what I should be eating if I am trying to lose weight. “Fear not!” I thought to myself (or perhaps even aloud) “You will be going to the gym this afternoon!”

Cramping My Style
It was a little before 4:00PM EDT (1600 EDT) when I finally escaped to the workout room in the office building. At that time it was me and three women sacrificing our bodies to the exercise gods.

I hopped onto one of the two Spin bikes, selected a program (different from the one I chose last time), and started to spin. The program I selected was a forty-minute cadence ride; no problem. However, after about twenty-five minutes of spinning my calves, the only part of my body for which I have pride, cramped hard. Other than having setting up the bike differently that I had last week, there are about six things that can be adjusted, I have no idea why this occurred. And yes, I had been drinking water all day and continued while riding. I made an effort to “walk it out” on a treadmill, to no avail. Even as of now I am experiencing some tightness/discomfort.

I’ve packed a gym bag for today, I’ll have to see how things go.

It’s Good To Remind Myself Where I Don’t Belong
My “new” Mac Mini was delivered to Lenox Square yesterday. It’s “new-to-me” but is a refurbished computer sold by Apple, who has not updated the Mac Mini line since late 2014. For my needs it was the right computer in the right price range.

Perhaps the last time I set foot inside Lenox Square was more than three years ago when I went to a book signing at Williams Sonoma.

I don’t belong in malls. I am not trying to “look cool”, “hang out”, or am I influenced by advertisements to be a consumer who buys the latest fashion trends. I was there to go to the Apple Store, and given the time I finally got to the mall, to eat something for dinner at the food court.

The food court in Lenox Square has changed drastically since the last time I consumed food there. I’ve been to the mall since the movie theater closed, which still boggles my mind, but was not prepared to see the array of “places that have real restaurants” — Five Guys?, Chipotle?, Checkers? — represented. As I do when I eat at a mall food court I found the Asian place and ordered a styrofoam box of fried chicken in a sweet sauce, all scooped over rice. Was it good? I suppose. Was it healthy? Not in the least. About the only good thing I can say about my meal is that I drank water instead of soda.

Home Is Where The Server Is
The rest of my evening was spent replacing a 2009 Mac Mini with the 2014 Mac Mini. Inevitably I had to set up a user account, download software updates, and perform a backup all of which took longer to complete than I wished. By Monday I may have the computer configured to be my new build/media server.

What will I do with the 2009 model? I’m not sure. With its mere 4GB RAM, and no ability to upgrade to Apple’s newer operating systems, it’s about as performant as a 52-year-old fat guy who writes a blog. That is to say it has a purpose, but what that purpose is is currently unknown.

Beer Me Thursday
I will be at RiRa this afternoon, say sometime around 5:00PM EDT (1700 EDT). I believe that ITP-Reader Steve will be in attendance as well. If you have interest and your schedule permits, please join me/us.

I will be at RiRa around the same time next Thursday too, if that suits you better.

PS – ITP-Reader Stacy, I hope that you’ve noticed that website linking is back. 😉

15 Responses to Let’s Try This Again