All I need now is to shed sixty pounds, lost twenty-five years, grow a long beard, and start drinking PBR.

Last night I stopped into the Home Depot on Ponce, bagging the idea of eating at Eats because I was nowhere near hungry enough to do so. I went to Home Depot to look at replacement lawnmower wheels, which are expensive, as well as getting a backup lawn mowing plan. I bought a hipster lawnmower, a $200 push mower (I always buy the top of the line if I can afford it, and in this case I can afford it).

Because:
1. I have no confidence in my ability to replace the pull cord on my current 17-year-old mower.
2. It will cost me almost $35 to replace the two front wheels on my current mower, because it is front-wheel driven. Of course I could by cheaper wheels that don’t engage with the drivetrain, but why would I?
3. I need to mow the lawn before I go to Raleigh at the end of next week and I due to my schedule am doubtful that I will get the gas powered mower running again before then. As we near the end of mowing season I can push the new mower around the lawn and take my sweet time to repair the other one. If the timetable goes like all of my other fix-it projects the gas-powered mower will return to action in 2027 +/ 5 years.
4. I will no longer have to wait for a “respectable hour” before I mow my lawn. If I want to get out there at 7:00am I can now do so without worrying about pissing off neighbors.
5. The added exercise of pushing a mower will be good for me, right? 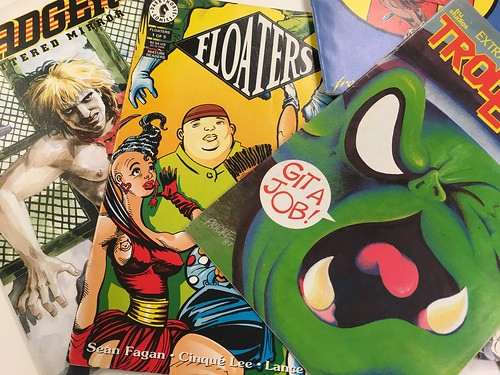 These were left on a break room table at the office. Is someone trying to tell us something?

The Sound Of Silence
I love silence, maybe that’s another reason I am not in a relationship? Well, at my age I get a close approximation of silence due to the years of allowing extremely loud music to enter into my ear drums. My love of silence is why I am no fan of the “open floor plan” workspace. Hello headphones and noise generating app. Goodbye annoying conversations about everything under the sun, and my neighbor’s music that sounds like mosquitos are encircling his head.

So it’s odd that I am not enjoying silence in one aspect of my life — watching Bundesliga 2 soccer matches. It’s weird, but there has been no audio broadcast for either of the two Bundesliga 2 games that I have streamed through the Fox Soccer Match Pass app. Is this intended? Is this how Fox can stream games without concern of advertising (not that any commercial breaks exist in soccer)? I don’t know. I think the most frustrating thing about the silence is that I was hoping to start getting used to the pace of Germans speaking German, even if I didn’t understand most of what they were saying by watching these matches.

Getting On My Nerves
I rode the trainer in the basement last night for about forty minutes, giving up when my left knee, which has been injured for years, started bothering me. I showered and then sat around doing some coding, and when I got up my hip started bothering me.

This is the second workout in a row where I’ve had pain in my left hip area, I know that you know I injured this hip four months ago, after working out. Thankfully the pain this time around is nowhere near as bad as it was last Thursday/Friday. I’m hoping this stays true all day. Because somebody has German homework to do today for his class tonight, and he’s obviously not going to be able to study by watching soccer matches…

32 Responses to 20% Closer Toward Hipsterdome!