The legs are turning but it doesn’t seem that I am getting anywhere.

Credit Where Credit Is Due
ITP-Reader Barb was right, current Thursday night NFL games are also being shown on CBS. Therefore I could have watched the Packers game on TV last week and not whined about not seeing the game in the blog on Friday.

Iâ€™m Still Struggling At â€œXYZ Corpâ€
I need to take this as a gigantic learning experience, but I have accomplished nothing other than working myself into a lather because I have been unable to fix our build process. Yesterday pointed me into a new direction where apparently the build script is unable to unlock the keychain, for which I have yet to find an answer.

I keep thinking that coding at home will be the antidote for my woes, but the night goes by in a blink of an eye (great rhyming song lyric for you) and I wind up getting nothing done there either.

My Mother Has Been Preparing Me For This
I have reached an age where it going forward it should not seem unreasonable for the people I admired as I grew up to die. I have watched my mother go through it, now its my generation’s turn.

At 66, Tom Petty seemed “too young” to die, especially the way he did. One of my lifeâ€™s regrets was not seeing Tom Petty and the Heartbreakers play the concert in Gainesville, FL (their hometown) when I was a student there in the late 1980s / early 1990s.

This marks two of my childhood music idols to have died in the past month. This is one of the many reminders that we should live for today. 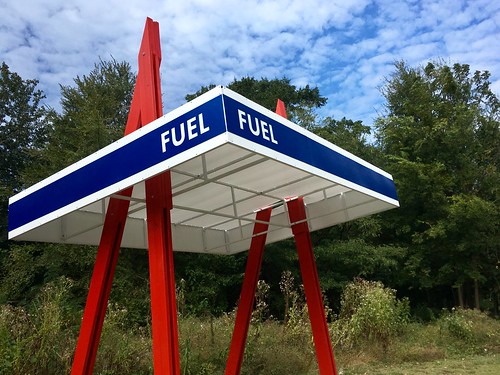 Yesterday’s lunch walk found me going around Piedmont Park again. This time I made it up to the north end of the park before bending back south on what I guess is the official Beltline Trail. Along the way I saw a handful of art installations, including this one.

Speaking of walks, I have two planned for later this week — tomorrow I am going to try the “MARTA in, Walk back to my car”, and on Thursday I will do another lunch-time walk (ITP-Reader Steve, let me know on Thursday if you are interested in joining me that day). The goal is to increase my exercise, photography, and potentially my German vocabulary at the same time.

Blast From The Past
German class starts again tonight. I’m not ready. This might be a make or break session for me as I need to start making lasting improvements to my skill level to justify the time and money costs.

Ready or not here we go!

13 Responses to Ready Or Not