I Took The Morning Train

I am experimenting today. Why not, it’s not like I don’t have a million and one things on my plate. This morning I rode MARTA in to work.

If today’s MARTA ride was the norm people would love riding the train. I literally walked down the stairs and into a train at my first MARTA station, and then when I was to transfer to a northbound train I waited less than thirty seconds for it to arrive.

Well done, MARTA, but I am glad that I won’t be giving you an opportunity to ruin today’s opinion later this afternoon. No, instead this afternoon I am going to change into some “walking clothes” and hoof my way from “XYZ Corp” to the MARTA station at which the M6 is parked. 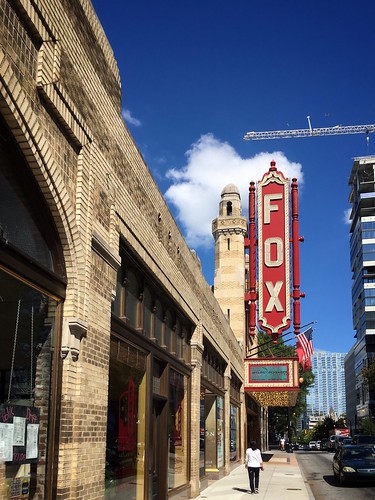 No, my title is not mistyped. Think Spanish, “Fox and Lady”

This snapshot was taken on my return route of yesterday’s lunchtime walk. I played the game a little differently yesterday, pausing for lunch during the journey. From “XYZ Corp” I walked down to The Canteen at Technology Square on 5th Street. At The Canteen I ordered a succulent hamburger and french fries at Fred’s Bread & Meat. The burger was
sloppy and great, the fries were good.

Try Again Week?
This must be “Try Again Week” here at ITP because another once-abandoned practice was rekindled — filling beer growlers.

In the past I’ve criticized the growler movement for it’s price and need to quickly consume the beer once the growler has been opened. Things on these fronts have unfortunately not changed. The cost to fill two, 64-ounce growlers was $33 (rounding down), or roughly $0.26/ounce; two six packs of beer, each containing 72 ounces would cost me no more than $22, or roughly $0.15/ounce. You don’t need to be an economics major to figure out which is the better buy.

It may be time for me to put this practice back out to pasture.

I May Be Hanging Up My Fantasy Cleats
My Fantasy League Football team is now 1-3. Ugh. The past week I lost to a person who had Andrew Luck for a starting quarterback! For those of you not following the NFL Luck has been injured since last year and has not played a single game this year — and I still lost!

It may be time to admit again that I am not good at this, and it doesn’t bring me any enjoyment, and quit again.

10 Responses to I Took The Morning Train