I Am Still Unsure

There are so many things in life about which I am unsure, my feelings about the changes made by Apple for iOS 11 keeps moving up the list. At first I hated iOS 11, now I just strongly dislike it. Perhaps when all of the Apple-following websites spoil the features planned for iOS 12 next year I will have grown to like it.

Since June this blog has been nearly exclusively produced with an iPad, many times it’s been an iPad Mini 4 using a Zagg Portfolio Bluetooth keyboard. It has been extremely useful and incredibly mobile, but there are times I wonder if that I could just convert one or two iOS apps to macOS I’d be better off buying a MacBook or 11″ MacBook Air and giving up on the iPad lifestyle.

The Walking Experiment
Yesterday’s walk back the car was fine, but I was not inspired to take a single photo. I even attempted to spice things up by stopping into The Albert for a beer and a snack.

There were many happy people on the Beltline, unfortunately I was not one of them; I just can’t shake the cloud hanging over me. I tried listening to an audiobook for awhile before converting to playing music via Spotify. Want to guess to what I was listening?

My music of choice yesterday was “Der frÃ¼he Mozart: The Early Mozart” an album by Michael Martin Kofler.

I bet you didn’t see that coming!

I have always had tastes for nearly all types of music, with the exception of most rap / hip-hop, and songs by modern-day singers. In recent years I find myself turning a lot to jazz and classical chamber music, perhaps because I wasn’t inundated by these for the first fifty years of my life.

Will I attempt the “MARTA in / walk out” again? Sure, but only when the weather and my schedule permit me to do so. 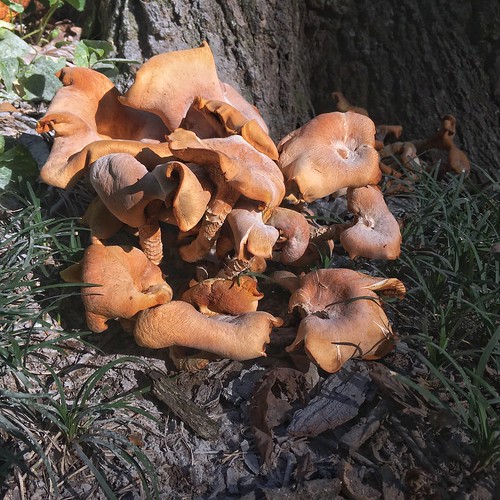 Taken the day before yesterday as I walked around killing time before my German class. I am fascinated by fungi, and would have loved to have a macro lens for this shot.

Where Do The Nights Go?
As I have been toiling at “XYZ Corp” the past few weeks I have been scheming of the work that I will do when I get home at nights. But then I don’t get anything done!

Last night is a perfect example. By the time I got home, no later than 6:30pm, I had eaten dinner and had the night ahead of me. I watched perhaps thirty minutes of YouTube video, started reading a book that I want to have read by the time I go to LEAF in a few weeks, and then went into my bedroom to do some German homework.

I found out that the class notes for German had not been posted, so since I took no photo of this week’s assignment I had no clue what I was supposed to do. At this point I should have spent an hour or so learning vocabulary, but I didn’t do that. I could have started writing code at this point too, but didn’t do that either. Instead I started reading again, but not for long.

When I woke up it was a little past 12:30am, and I was probably awoken by the sound of one of my toilets refilling as it has acquired a leak recently.

I woke again around 2:30am, and then once more at 5:45am when my alarm clock sounded.

And that is how yet another night of my life was spent not doing the things that I wanted to do. Well, I did start reading a book, so that’s something I suppose.

Make it a good Thursday. ITP-Reader Steve, I will be at the eagle around noon, if you are able and interested in hoofing it a bit today please meet me then.

12 Responses to I Am Still Unsure