Yesterday was a tough day and I am fairly sure by now most of you know why. Also, clearing my house of reminders of better days has made things gut wrenchingly harder; it signals the finality of it all. Apple also decided to kick me in the nuts yesterday by showing me a photo memory from pre-COVID 2020. I best get used to this happening because I had a lot of good memories from the past four years captured on digital film. When the time comes that I go to my first concert alone since 2018 I will probably be a babbling buffoon again. I’m trying. I’m not the first one in the world to experience this pain, but it’s tough regardless. Additionally I am in some bothersome/worrisome physical pain, in multiple parts of my body, some of which have arisen very recently, to pile onto my emotional distress. Odd to feel this way a week after “passing” a physical…

Yesterday morning I pushed myself so hard running Monday’s Moonlite trail that I may have slightly injured my right foot, and turned my palm/wrist black and blue again for awhile. I suppose exercising to excess is still better than drinking to excess? There was a Scenic View on the trail, and I may have gotten a better view than those who ran Monday night because I was running during morning golden hour. 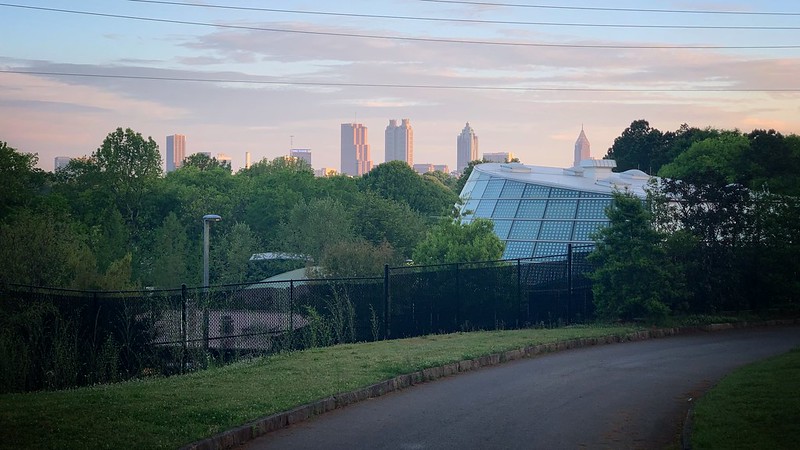 It was good that I ran early in the morning because the rain certainly washed away some of the chalk and flour marks for the trail.

After exercising, showering, and eating a late breakfast of leftover pizza, I sat around the house. That was until I saw that rain was imminent, at which point I decided traffic to Dunwoody was going to suck, so I left early to ensure an on time arrival. I was right, traffic was bad. The survey was fine, garnering me $80 for my hour of “work”.

Now that I shouldn’t have guilt going to new-to-me breweries without my brewery partner, with whom I made many brewery trips, I wanted to try Mutation Brewing in Sandy Springs. But then realized that I only had enough time to eat a quick food court meal at Cumberland Mall before the time slot I chose to pick up my purchase at Apple. And the thought of traveling back to Roswell Road just to get beer was not appealing. Next time. I have a feeling that I won’t be filling the position of brewery partner any time soon and I will have to get used to going out to breweries alone again… at least during the work week.

I wanted to pitch my small tent yesterday and waterproof it, but everything was wet outside so I decided to wait. This will be the tent I take to BRAG Lite because it is much easier to set up and break down than my bigger one.

Yesterday I contemplated spending some of that $550 survey money on a new bicycle computer, a Wahoo Fitness ELEMNTBOLT. My Garmin, now at least eight years old, is still working fine but I am considering the features of the Wahoo as an upgrade, and my disdain for Wahoo not hiring me seven years ago has worn off. Proof that time heals the jilted…

Last night I stayed home and streamed videos. Dinner wasn’t fancy pants after all, it wound up being fake meat tacos, mostly because I felt I had already eaten too much earlier in the day, and also because I had all of the necessary ingredients on hand. To add a splash of green to my tacos I harvested some sorrel, or was it spinach, from WLF. While out there I noticed that I have a cabbage heading, but I also noticed caterpillar poop on the plant, so the odds that I will get to eat the head of cabbage are low. Ugh.

I fell asleep on the futon watching videos, only to wake up around 11pm. As you can well imagine this did little to aid in my effort to sleep through the night. I started reading “Around the World in 80 Days” and stayed up until almost 1am reading.

This morning I am going to run/reccy my May 5th SLUT trail, though I might have to wait until later in the morning than yesterday since it’s a bit chilly out there today. Trail will be shorter than three miles long (as of now) since the hare doing the cooking wants me to get the hounds out and in as quickly as possible. It seems a little silly to reccy without having a weather forecast, but I need exercise anyway.

This afternoon I have a paid video conference from home with a service called Crowdtap. Once my reccying is done I need to shower, and then ensure that my now one-year-old laptop can perform the video conferencing. If it can’t then there is something seriously wrong in this world.

Tonight is a Betsy night. It is my turn to cook again and I have yet to figure out what I am making. I’m contemplating ordering food to take over, most likely from SoBa Vietnamese, which will cross another of the “good memory” bridges.

Hope that all is going well for you.

I solved today’s Wordle in four attempts; my starter today was TOUGH